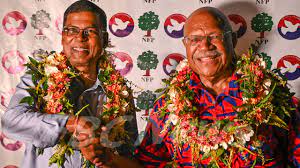 He claims jointly, they can fix Fiji’s economy and that with the skill sets they possess, they can improve the health system, reduce the living cost and implement other developments.

While addressing party supporters in Rakiraki in Fiji’s Western division, Prasad has again claimed that the FijiFirst Leader Voreqe Bainimarama and FijiFirst General-Secretary Aiyaz Sayed-Khaiyum are spreading fear and confusion among Fijians.

Prasad further claimed that the two FijiFirst party leaders are doing this because they are aware that people want a change in government and after December 14th, an NFP and PA government would be put in place.

Prasad also told the attendees that assistance such as social welfare, and free bus fare would not be ceased if they do get elected into power.

Peoples Alliance Party leader Sitiveni Rabuka said despite being aged 74, he has a burning desire to lead Fiji and they will not be moved by the fear-mongering tactics shown by Bainimarama and Sayed-Khaiyum.

“The good thing about democracy is that once every four years in our new system in Fiji, you have the power-the people have the power to choose whom you want to be your government.”

He claims that the Leader of the People’s Alliance, Sitiveni Rabuka, and also the National Federation Party Leader Professor Biman Prasad have been going around during this campaign period boasting about the content of the abolished Constitution.

He said this is because the 1997 Constitution was compiled by the late leader of NFP, Jai Ram Reddy and Rabuka.

“The 1997 Constitution promoted racial discrimination and this was evident then whenever a general election is held like the one that was done in 1997. About four lines are formed-one are for the indigenous Fijians, the second line was for Fijians of Indian descent, and one was for half-caste. This depicts one thing, racial discrimination used to thrive then but this has now changed.”

Bainimarama claims that Rabuka has been trying to justify himself by stating that the removed document gave them the right to lend the land at Momi and Denarau Island.

While addressing residents in Lami last night, Bainimarama also highlighted that political party leaders are now misleading Fijians by saying the government is struggling to pay off the national debt.

He claims that during campaign meetings, Fijians have been told that their children and grandchildren would be held accountable.

The government leader said that Fiji’s national debt is well managed and even the FijiFirst party has been working to repay the debts that were accumulated by the governments before them that includes the Soqosoqo ni Vakavulewa ni Taukei (SVT) and the Soqosoqo Duavata Ni Lewenivanua governments.