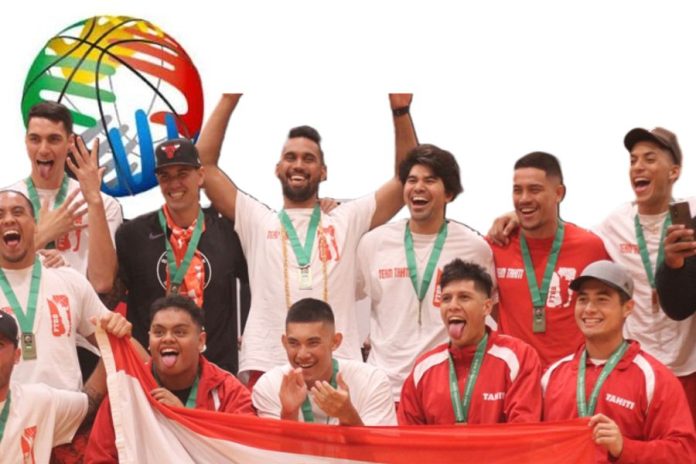 Tahiti and Tonga have qualified for the Solomon Islands 2023 Pacific Games men’s basketball tournament after securing first and second place, respectively, in the International Basketball Federation Polynesian Cup in Kaitaia in New Zealand.

Tahiti pipped third-place finishers Samoa on the final day of the round-robin tournament 92-88 following a remarkable comeback to ensure they completed the tournament undefeated.

Captain Ariirimarau Meuel led his team with 33 points and 10 assists to seal the win despite trailing by 23 points at one stage.

“It was a tough game, as we expected,” Meuel said.

“We know that Samoa are a really good team and we struggled in the first half by plus 20.

“We battled as a team to get through those 20 points and get the win.

“The message [at half-time] was ‘don’t panic’, we still have a whole half to come back so we just needed to believe in ourselves, and it worked.”

Tahiti are the most successful team in the men’s basketball tournament at the Pacific Games with five gold medals, including victory in the first four editions, but have not won since Papeete 1995.

“We have to now prepare well for the Pacific Games in 12 months’ time to get the best result we can for Tahiti,” added Meuel.

If Samoa had won they would have finished top of the standings but the loss, combined with Tonga’s triumph, saw them plummet down to the bronze-medal position.

The Tongans cruised past American Samoa 72-47 at the Puma Ora Stadium as Stephen Paea, Viliami Foketi, and Siale Bain-Vete all starred.

Marcus Alipate had a consistent tournament and is excited about the future of Tongan basketball as they now set their sights on the Pacific Games.

“We have lot of guys that are young, hungry and want to play and for us, to come from having six guys in 2018 to a squad of 10 here and a lot of the guys are young so it’s a blessing,” Alipate said.

“We also have a women’s team which is great, we are just trying to build each season and year.

“We have come a long way since 2018 and we have a lot of good guys and a leadership group and I’m just happy with a good team win and we are happy to finish the tournament like this.”

Teams are set to travel to Honiara for the 2023 Pacific Games from November 19 to December 2 next year.

“Dreams destroyed” – what Olympic exile would mean for weightlifting and...