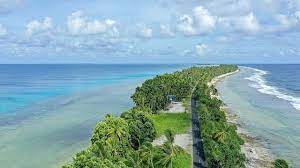 As the COP27 climate talks got underway in Egypt this week, Australia’s climate and energy minister Chris Bowen announced it would bid to co-host the annual United Nations climate summit with Pacific Island nations in 2026.

Playing host to the world’s climate negotiations could be a very big deal. It would be the largest diplomatic event Australia has ever held and would have major implications for both climate policy and our international relations.

A successful summit would signal Australia’s shift from fossil fuel heavyweight to renewables superpower and herald a new era of regional cooperation with the Pacific. However, these outcomes cannot be assumed, nor can support from Pacific nations.

Over the past 30 years Pacific island countries have played a crucial role in the global response to the climate crisis. Meanwhile, Australia has sought to avoid obligations to cut emissions and has acted as a handbrake on global action, even while expanding coal and gas exports. This legacy cannot be put to one side easily, nor should it be.

To successfully bid for and host the UN climate talks, the Albanese government will need to show Australia really has changed by bringing more to the table, and taking coal and gas off the menu.

What would it mean to host a COP?

Australia has never hosted the annual UN climate talks. Doing so would be a chance to revive Australia’s international reputation and reposition us to embrace the benefits of a global clean energy economy.

Sydney or Melbourne would most likely host, as between 20,000 and 40,000 delegates would be expected to attend. Apart from the technical negotiations, the summit would be an industry trade fair – a chance to showcase Australia’s growing clean energy export industry.

Prime Minister Anthony Albanese argues that Australia has a once-in-a-generation opportunity to become a renewable energy superpower. He is right.

Australia can play a supersized role in the global transition to net-zero by exporting the clean energy commodities and critical minerals other countries need to cut emissions.

According to leading economist Ross Garnaut, Australia could reduce global emissions by 8% – especially by exporting zero-carbon metals to growing economies in Asia. This would be the equivalent of cutting all the emissions of Europe and the United Kingdom.

Australian diplomacy matters, too. We have history as a responsible middle power, galvanising action to protect the environment. In 1982 Australia supported a global moratorium on commercial whaling. In 1989 former Prime Minister Bob Hawke championed a treaty to ban mining in Antarctica.

With similar ambition today, Australia could broker a new era of global climate action, especially if we work with Pacific Island nations as a regional diplomatic bloc.

Australia’s relations with Pacific island countries are more important than ever. In the context of China’s growing interest in the region, Australia is keen to reaffirm its place as the security partner of choice for island governments.

But Australia will need to take serious action on climate change, as the Pacific has made it crystal clear for decades that climate change is the region’s single greatest threat.

Pacific island countries have led the global response to climate change in the decades since a scientific consensus on the issue emerged in the 1980s.

In 1990 they formed a diplomatic alliance with island nations in the Caribbean and the Indian Ocean to pursue shared interests in UN climate negotiations. This alliance has since swelled to 39 countries.

Indeed, the first draft of the 1997 Kyoto Protocol – which required wealthy nations to reduce emissions – was put forward by Nauru on behalf of this Alliance of Small Island States.

They have succeeded in shaping global climate action, despite the divergent position of Australia.

In fact, Australia has used its position as the most powerful member of the Pacific Islands Forum to try to weaken regional declarations put forward by island nations at key milestones in the global climate negotiations.

In the run-up to the 1997 UN Kyoto climate summit, for example, Prime Minister John Howard refused to back Pacific calls for a protocol with binding targets to cut emissions.

Similarly, ahead of the 2015 Paris climate summit, Prime Minister Tony Abbott refused to support Pacific calls for a global treaty to limit warming to to 1.5℃ above pre-industrial levels. Pacific island states have consistently argued that this temperature threshold is key for low-lying nations such as Kiribati, Tuvalu and the Marshall Islands to survive.

In response, Kiribati President Anote Tong suggested Australia should leave the forum altogether if it wasn’t prepared to back the islands’ positions in global climate negotiations.

When Prime Minister Scott Morrison again tried to water down a regional climate declaration at the Pacific Islands Forum in Tuvalu in 2019, a frustrated Fiji prime minister Frank Bainimarama told waiting media that partnering with China was preferable to working with Morrison.

What Australia needs to bring to the table

To co-host the 2026 UN climate talks with Pacific nations, Australia will need to show it’s finally serious about tackling the climate crisis.

While Pacific leaders have welcomed Australia’s new 2030 target – to cut emissions by 43% from 2005 levels – they clearly expect more. Bainimarama has pointedly argued for Albanese “to go further for our family’s shared future by aligning Australia’s commitment to the 1.5-degree target”.

By 2026, Australia will need to put in place policies that will drive deeper cuts to emissions, enabling us to strengthen our 2030 target and to set a much more ambitious 2035 target.

Global emissions must fall by 45 percent by 2030 to have any chance of achieving the Paris Agreement goal of limiting warming to 1.5℃. A wealthy nation like Australia – with vast, untapped, resources for renewable energy – should be aiming to reduce emissions by 75 percent this decade.

At COP27 in Egypt on Tuesday, Tuvalu announced it would join Vanuatu’s support for a Fossil Fuel Non-Proliferation Treaty, intended to help manage a global transition away from coal, oil and gas.

Over the next four years, we can expect more Pacific nations to join this treaty, adding pressure to tackle Australia’s biggest contribution to the problem: coal and gas exports.

Instead Australia will need to put more money on the table to help developing nations cope with climate impacts. As a start Australia should increase overall commitment to international climate finance from AUD$2 billion (US$1.2 billion) to AUD$3 billion (US$1.9 billion) over the period 2020-2025.

As potential co-host for COP31, Pacific island nations will also expect Australia to contribute to a new global fund to address loss and damage from climate change. Expectations will only grow with New Zealand announcing it would provide finance for loss and damage, a move already welcomed by island leaders.

This is the crucial decade

By 2026 the window for securing a safe climate will be closing fast.

Much can change in four years’ time. Over the past four years, we have seen more than 100 countries – representing 90 percent of the global economy – commit to net-zero emissions. Most developed nations have committed to halving their emissions by 2030.

Despite these shifts, the world remains dangerously off-track. Even if all countries meet their current targets for emission reductions by 2030, the world is headed for 2.4-2.6℃ of warming this century. This would be a cataclysmic outcome.

By hosting the UN climate talks, Australia could broker a new round of global ambition to cut emissions, and cement our place as part of the Pacific family. But first we will need to show we’re taking this crisis seriously.

Tonga calls for COP26 to accelerate actions to tackle the climate...