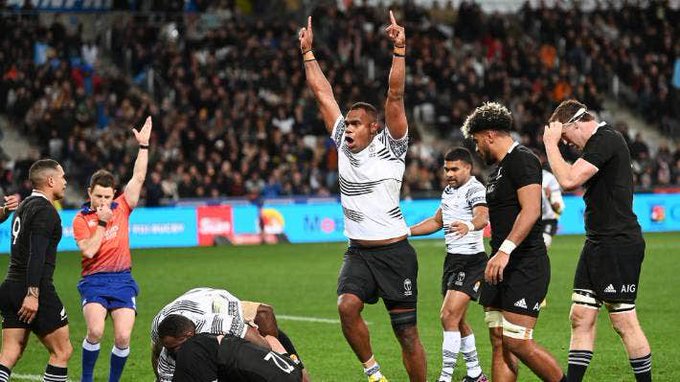 Flying Fijians put up a gutsy performance despite doing down 57-23 in their first test match against the All Blacks in Dunedin on Saturday night.

The national 15’s side led by Levani Botia played with a lot of emotions dedicating it to the loyal fans here in Fiji as we continue to face the second wave of COVID-19.

Volavola continued to gain points as he successfully slotted in another 3 points off the tee but the opponents were quick to reply with a try from David Havili who also managed to get his second try at the 21st minute.

Six minutes later after successfully gaining possession and winning the ball at the breakdowns Flying Fijians pushed it way over the All Blacks try line and it was Albert Tuisue who scored Fiji’s first try.

All Blacks took a slender lead of 21-11 at the breather.

Flying Fijians made a powerful start in the second spell. Hooker Sam Matavesi sprinted down the sidelines breaking a few tackles and then managed to offload to Mesulame Kunavula who dived in for Fiji’s second try. After putting the former World Champions under numerous pressure, Fiji was awarded a penalty try as they closed the score to 38-23.

All Blacks ran in four tries in the last quarter of game to seal the match in Dunedin.

Flying Fijians skipper Levani Botia thanked his players for putting up a courageous performance despite having short time to prepare for the first test match.

Botia said “I thank my players who played their hearts out.

“We understand its our first time to play against the All Blacks, there are some players who earned their first cap and I want to salute them for their performance tonight.”

He added “We came here tonight to play Fijian rugby, we worked hard at the breakdown and played Fijian rugby.

Playing All Blacks is not easy therefore we prepared ourselves mentally and played for full 80 minutes.”

Botia dedicated the match to fans in Fiji.

Flying Fijians flanker Johnny Dyer, as usual was at his best showcasing his “A Game” against the All Blacks.

Dyer was just too good at the breakdown, winning a lot of possession for Flying Fijians in both the half.

He said “If Flying Fijians get more time to prepare for test matches like this, the performance of the players would have been at another level.”

All Blacks captain Aron Smith was impressed by the performance and believed it was this kind of match which they need to test their players.

“Fiji brought a lot of intensity and probably set a level that we needed to come out in second half and raise our bar.

We knew it was going to be tough this week, they got some quality players and I think both teams will take learning from tonight’s game and it will be an awesome test match next week.

They won the collision, were really good and brave in their contact and tackles and then their pressure on the ball, they were just outstanding tonight” said Smith.