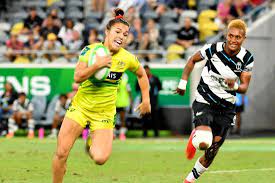 Oceania Rugby revealed details of two tournaments on Tuesday, both to be held in the Auckland region of New Zealand, that will help competing teams fine tune their plans for the global events.

Navigation Homes Stadium will play host to the Oceania Rugby Super Sevens between 24-26 June, the draw for which will be released next Tuesday.

The Australians head into the tournament on the back of a successful season in the HSBC World Rugby Sevens Series, in which they won the women’s title and are two points off the top of the men’s standings with only one event to go.

The Oceania Rugby Super Sevens is therefore timely as they attempt to maintain their form for the Commonwealth Games at the end of July and on to RWC Sevens 2022 in September.

Fiji, New Zealand and Tonga will also send teams to both the Coventry Stadium and Cape Town, meaning the regional tournament is an important staging post on that journey.

Two weeks later, the focus will switch to 15s as the Oceania Rugby Women’s Championship returns for the first time since 2019.

Featuring RWC 2021 participants Fiji as well as Papua New Guinea, Samoa and Tonga, the tournament will be played across three match-days at Massey Park and Navigation Homes Stadium.

It will be the first time three of the teams have played a test match since 2020 and provides Fiji with valuable preparation time ahead of RWC 2021, which they begin against England at Eden Park on 8 October.

Fijiana Drua enjoyed a stunning debut campaign in Australia’s Super W, winning the championship, but the national team lost against both Japan (28-14) and the Wallaroos (36-19) in May.

“We have the world, Olympic and Commonwealth sevens champions in our region and we intend on giving our teams the best preparation possible to retain the coveted top prizes in rugby sevens,” Oceania Rugby Interim General Manager, Lemalu Wayne Schuster said.

“The border closures and impact of Covid within our region has had ongoing effects on team performances. This event provides a unique competition preparation for our teams in a boost ahead of their campaigns.

“The South Auckland community has a strong Pasifika heritage, and we are looking forward to seeing the support for all of the teams across both competitions in the coming weeks.”
Oceania Rugby Women’s Championship fixtures (all kick-off times GMT+12)