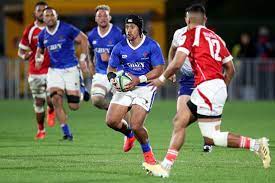 Manu Samoa ran in five second-half tries to take the upper hand in their France 2023 qualifier against the ‘Ikale Tahi.

Samoa ran in five second-half tries to win the first leg of their Rugby World Cup 2023 qualifier 42-13 against Tonga in Auckland.

Henry Taefu scored 20 points at Mt Smart Stadium as Manu Samoa turned on the style following a cagey opening period, which they led 6-3 at half-time.

The size of Samoa’s victory means that they will book their place at France 2023 as Oceania 1 should they avoid defeat by 29 points or more when the teams meet again in Hamilton next Saturday.

Prior to kick-off, Samoa had won seven of the eight Rugby World Cup qualifiers contested by the teams but it was Tonga who got on the scoresheet first in Auckland.

Scrum-half Sonatane Takulua converted a penalty, before Taefu struck his first successful kick of the day.

Takulua missed a 31st-minute kick at goal, which allowed Taefu to give Samoa the lead for the first time, from the tee. That advantage could have been greater at the break as Jonathan Taumateine crossed the whitewash, but the try was disallowed for a knock-on.
Samoa seize control

Taefu did add to his side’s score with a penalty early in the second half, before quick-fire tries from Ray Niuia and Alamanda Motuga helped propel Manu Samoa’s lead to 21-3.

However, it did little to wrestle momentum back and Samoa were soon in the ascendancy once again as Taefu converted his own try.

Takulua ate into Samoa’s lead with a 60th-minute penalty, but could do nothing as Ed Fidow and Stacey Ili both touched down in the final quarter — either side of a Taulani yellow card — to put the seal on a 42-13 victory for Manu Samoa.

The winner of the two-legged tie will take their place in Pool D at France 2023, alongside England, Japan, Argentina and the Americas 2 qualifier.

Whoever loses could still have two more opportunities to make it to RWC 2023, as they will face the Cook Islands on 24 July for the right to compete in the Asia/Pacific play-off, and if unsuccessful in that cross-continental play-off, they will enter the Final Qualification Tournament.