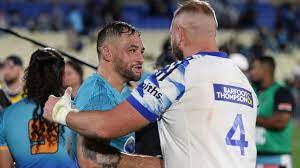 The blows keep coming for gritty, gallant Moana Pasifika as they continue to prove their worth as a new addition to the Super Rugby Pacific landscape.

Moana Pasifika coach Aaron Mauger revealed after Tuesday’s meritorious 32-19 defeat to the Blues in their catchup clash at Mount Smart Stadium that they had to deal with another Covid outbreak and a team reshuffle on the day of the game.

But Mauger could not have been prouder at the way his rejigged side dealt with the latest blow from the virus – they sat out the first two rounds of the competition because of a wider outbreak while in Queenstown – as they work through a phase of four games within 14 days, and back-to-back matchups against crosstown rivals the Blues just four days apart.

Moana had to make four changes to their lineup on game day, moving former Warrior Solomone Kata into the starting XV at second five-eighths, and bringing new faces Joe Royal, Dwayne Polataivao and Nigel Ah Wong on to the bench as Henry Taefu, Ray Niuia and Manu Paea were eleventh-hour withdrawals.

The side hardly missed a beat in front of a modest but vocal crowd at Mount Smart, climbing back from a 19-5 halftime deficit to trail just 24-19 at the three-quarter mark. A late try to Fin Christie and a Stephen Perofeta penalty got the Blues home safely to their fourth victory on the bounce, but they made it clear afterwards they knew they had been in a battle against a side that very much belongs at this level.

“I’m super proud,” said Mauger. “We talked about small wins last week that led to an ultimate outcome (their historic defeat of the Hurricanes), and there were so many more tonight, so many good things to celebrate around the performance.

“We’re learning so much. That second-half effort was outstanding, giving ourselves an opportunity to win the game. Probably the defining moment was the (50th-minute) disallowed try to Luteru [Tolai]. Potentially it’s momentum taking him over the line and then it’s a different story. The Blues get down the other end and it’s a TMO decision to get them ahead (24-12).

“Man, we’re close eh. It’s a good feeling to be competing with the best teams in this competition.”

Mauger confirmed the latest obstacles overcome just to get on the field on Tuesday night – and vowed to front on Saturday at Eden Park in the quick-turnaround rematch.

“We had a few more challenges over the last 48 hours with more Covid cases coming in. There were changes, meeting guys for the first time this morning who came on to the bench. They slotted in and understand what this kaupapa is all about. I’ve been impressed with Joe, Nigel and Dwayne and the boys did an awesome job making them feel welcome.

“They’re good footy players and the message when they went out was to back themselves. But our boys welcome new people like no other team I’ve ever seen. They probably feel like they’ve been part of the team a couple of months after spending one day here.”

But Mauger also admitted the opening couple of months for this new entity coming into one of the leading professional competitions in the world had been challenging.

“So many of these things you can’t control … there have been plenty of deep breaths and plenty of laughs,” he said. “We laugh it off and then we just have to focus forward. We’ve drawn on the strength of our ancestors, and talk about voyaging and being in tune to the conditions and focusing on what’s in front of you right now.
“We’re really clear on where we want to go, so it’s important we focus on what’s most important right now, and for us sometimes it’s just getting through the day. Today was one of those days … enjoy it and celebrate. We had 13 debutants today, their families were all here, and what a special occasion for them.”

In terms of Eden Park on Saturday, Mauger added: “We’ll be able to field a team. We’ve just got to manage the squad well. From Saturday to the following Friday (when they visit the Highlanders) it’s a six-day turnaround as well. It’s a tough period, and we’ll try to be as fresh we can for Saturday.”

Mauger was rapt with the way his players adapted and changed in game, the strength of their driving maul and their continued evolution of their attacking game.

“The focus has been on growing our game … we’ve talked about simplicity, and good on good, building momentum which allows you to create pressure, and we’re starting to do that against good teams.

“It’s about getting the balance right, making sure game-drivers are seeing pictures and are not afraid to use the ball. It’s an old-school mentality that you’ve got to earn the right to go around teams … I want our boys attacking space and having the courage to do that. We want to be different.”