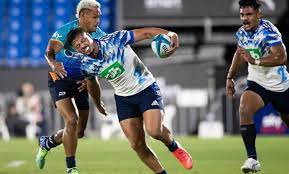 The Auckland-based Blues survived a red card and a fraught period around half-time when they almost gave up a 19-point lead before beating Moana Pasifika 32-19 in a rescheduled Super Rugby Pacific match.

All Blacks prop Nepo Laulala was sent off with the Blues leading 24-12 in the 58th minute on Tuesday for a shoulder charge which made contact with the jaw of Moana Pasifika centre Fine Isi.

The Blues conceded a try but also scored one while they were a man short and added a late penalty to close out a win by five tries to three.

An overwhelmingly dominant scrum gave the Blues a strong foundation and they used that and the penalties that resulted to build a 19-0 lead after 35 minutes. They scored three first-half tries including two for hooker Ricky Riccitelli from rolling mauls after lineouts.

But Moana Pasifika turned that tactic against them in the dying minutes of the first half. Hooker Luteru Tolai scored from a driven maul in the 37th minute for their first try just before half-time.

Another try from the same source in the 45th made the score 19-12 and put the Blues under pressure. Moana Pasifika crashed over the Blues line again in the 50th but a try to Tolai was disallowed, after being awarded by the referee, because of a double movement.

The Blues rallied with a try to hard-working captain Luke Romano, led 24-12 and the momentum of the match again began to swing in their favour.

Tomasi Alosio scored for Moana Pasifika immediately after the sending off of Laulala but a try to scrumhalf Finlay Christie again put the Blues comfortably ahead.

“We felt like we were playing how we wanted to play and then we sort of let the foot off the throat a little bit,” Romano said. “You’ve seen with the other games Moana has played they never give up, they never say die and they came back and had us on the ropes there.”
Tuesday’s match was originally to be the first of the season but was postponed after a COVID-19 outbreak within the Moana Pasifika squad. The teams meet again in a round-seven match on Saturday.

Waratahs on guard against Fijian ambush