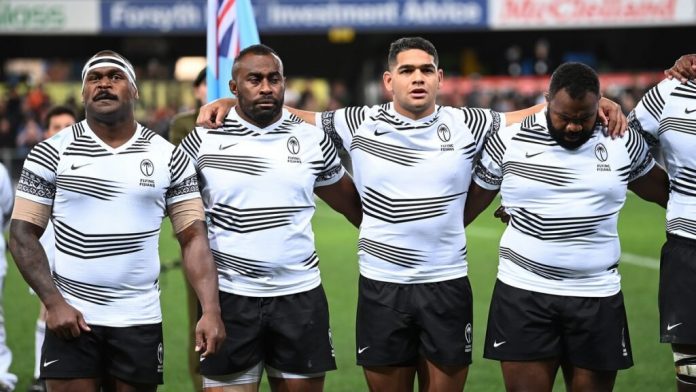 Fiji’s Kiwi coach Vern Cotter says his players weren’t properly consulted about the ‘Vaccinate Fiji’ jerseys revealed days before the All Blacks test, leaving them with little time to resolve the “complex” issues they created within the squad.

Fiji wore clean jerseys during the All Blacks tests after ditching the ‘Vaccinate’ messaging at late notice, prompting concern from medical professionals that it could hurt vaccination efforts in the Covid-hit country.

Cotter was asked after the game why the ‘Vaccinate’ jerseys had been ditched, and to his credit he did not dodge the question.

“That’s a really complex question, and the answer is complex as well,” he said.

“We really haven’t got the full answer. It was sprung on the players quite late in the piece, and there wasn’t a lot of exchange and consultation.

“As you can imagine, it’s a delicate subject for some, so it was probably better to just have a clean jersey at this stage, and spend some time on how we best want to communicate on this matter and how comfortable the players are in communicating it.”

“I was at a Fijian community meeting today(Saturday) in Henderson talking about vaccination,” he said.

“There was a lot of noise, particularly from the religious right, that should know better. People who should know to stick in their own lane – who have no medical qualifications whatsoever, who are really pressuring their congregation not to take the vaccine.

“It’s obviously infiltrated into the team, the strong sort of anti-vaccination messaging, which is just a tragedy for Fiji.“

Fiji will play the All Blacks in Hamilton on Saturday, and Cotter said the team would return to an issue that isn’t going away any time soon.

“I think the team showed solidarity and strength with what they did, with a decision to postpone a real communication, and they way they played during the game I think will inspire people in Fiji to play rugby, and these guys were role models for today,” he said.

“But like I said it’s complex, and we need to work it out, because it’s not just sport we’re talking about now. So, we’ll just take time to communicate better in future.”

The idea for the jersey reportedly came from one of the team’s main sponsors, Fiji Airways.

A spokesman for the airline said the company was disappointed with the team’s decision.

“We had given up our [advertising] space [on the jersey] to push an important, life-saving message to support the efforts of Fijian front-liners battling the current Covid outbreak.

“We defer to Fiji Rugby to address the issue.”.