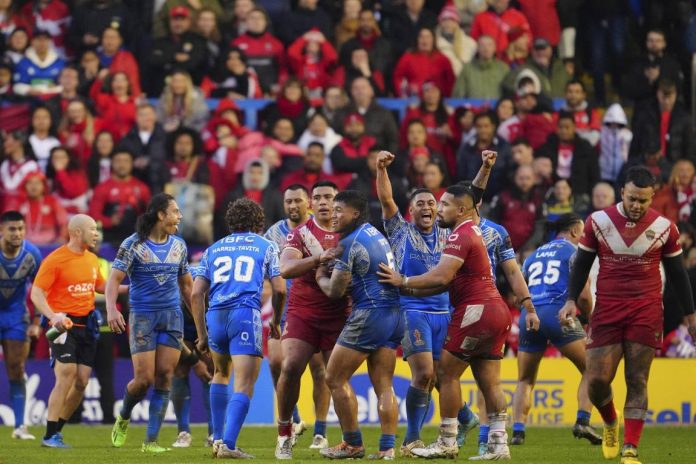 Toa Samoa are through to the World Cup semi-finals for the first time in history, after emerging 20-18 winners over arch-rivals Tonga in an intense quarter-final in Warrington.

After establishing an eight-point lead with 20 minutes to go, Samoa held on bravely as Tonga stormed home and threatened to steal a winning try in the final minute of the match.

In a game headlined by clashes in the forward pack, it was Samoa’s halves, Anthony Milford and Jarome Luai, who proved the difference, with Milford setting up two of his side’s three tries and Luai scoring the other.

It sets up a rematch of the tournament’s opening game, which saw England thrash Matt Parish’s side 60-6.

The Pacific showdown promised to be the game of the tournament so far, and from the pre-match Sipi Tau and Siva Tau war dances, to the hard-hitting defence and skill on the ball, it didn’t disappoint.

After opening the scoring four minutes in, it was Samoa who had the edge through the first 40 minutes and enjoyed the lion’s share of possession, but Tonga hung in the game to trail just 12-10 at the break.

After a free-flowing first half which saw plenty of scoring chances created, things tightened up in the second 40, with both sides trading penalty goals before Joseph Suaali’i broke the game open with a run which led to Brian To’o’s try.

In the end that was the play that won the game for Samoa, despite a late surge from Tonga which ensured this game thrilled until the very end.

“There was nothing in it between either team. I thought our two halves were sensational and have to give Joey our fullback, at 19 years of age, a rap. I thought we had a couple of good performers. Going to enjoy this then will worry about [England] tomorrow],” said Samoa coach Matt Parish.

“I thought they were a little bit better than us.They beat us to the punch early… at the end of the day we had a chance to win it and just couldn’t quite make that happen. I thought we had enough opportunity at the end to win the game,” said Tonga coach Kristian Woolf.

Eighty minutes now sit between Samoa and a maiden World Cup final appearance, with host nation England their confirmed opponent at the Emirates Stadium in London. For Tonga, the dream of going one better than in 2017 is now over….