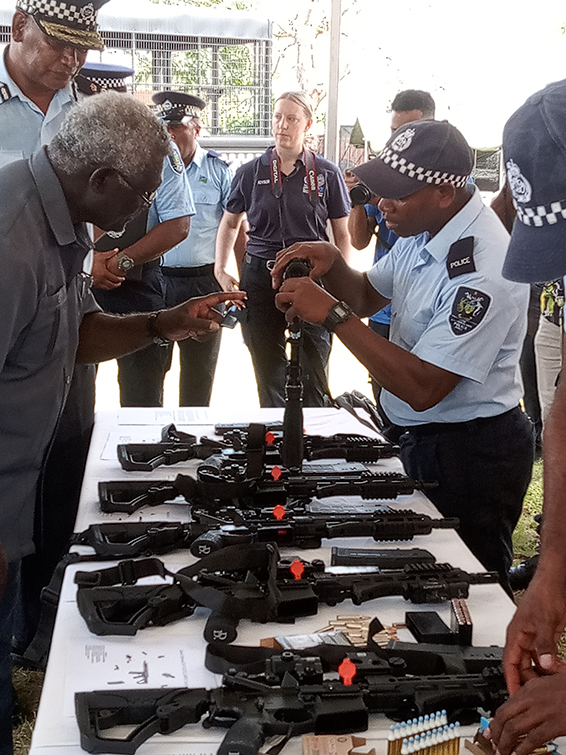 My country once lived in fear of the gun. Thousands of weapons, many stolen from police armouries, fuelled the years of violence known as “the tensions”, and disarming the police and population took years. Now, it seems China and Australia want to turn Solomon Islands into a gun state again.

This week Australia announced it would give the Royal Solomon Islands police force 13 vehicles and 60 MK-18 semi-automatic rifles – a move described as a “gamechanger” that brings a significant increase in capability. Last month, 34 officers flew to China for training.

A country with a population of less than a million people, we have been down this road before.

In 2000, a coup was instigated by militants and rogue elements of the police force and turned into three years of bloodshed and chaos. Australia spent close to a billion dollars over a 15-year period to restore the normalcy we are all now enjoying.

It’s as if all that hard work to collect guns was a waste of time and money. Solomon Islands banned firearms, but police were allowed to carry weapons again in 2017. We still have some villages around the county that have their signboards up, proudly proclaiming it as a gun-free village.

What exactly is our government trying to achieve here? Our leaders must be clear about what they want for the future and what kind of society we are building.

The leaders of my country must remember that we are so behind in our health and education development it has become embarrassing. Many of our schools are lacking proper facilities; our health infrastructure is even worse. And we still focus on the police. There are only about 2,000 police officers in the whole country – many very young and fresh out of training.

This also brings into focus the lack of police presence in many of our communities. But do we want communities that will adhere to rules only when there is a police officer close by? The argument for more police has been around for years, but the pool to choose from is close to nonexistent because our education system is not catching up with development demands.

Those who support the use of guns will argue that there are times when they are needed. But for a society that really does not have weapons to the scale of concern, Solomon Islands is packing on firepower like never before. Our leaders might think about building more sturdy systems within communities so that violence can be handled or depressed.

The overall cost of maintenance and ongoing financing to secure these weapons will come from who and where? I wonder if the maintenance and security of the first batch of weapons brought in by Australia is still being met.

Just looking around the world today, there is already a rethink of the need for police to have guns. Police violence is one of the biggest debates around the world, and yet we take the path to arming our police as never before. Is that how we want our youth to view leadership and rules?

Solomon Islands is becoming its own worst enemy, and we have lost direction.

Dorothy Wickham is a journalist in Solomon Islands