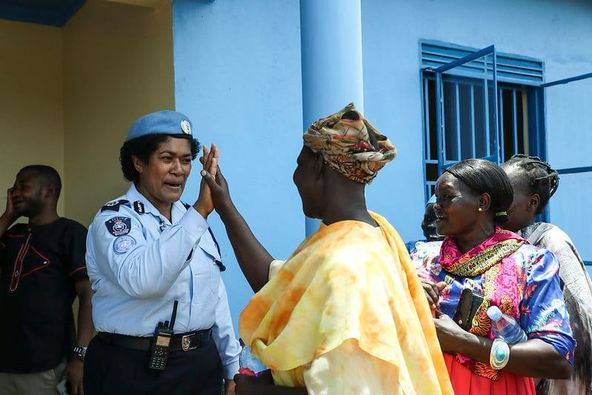 Police Commissioner Unaisi Bolatolu-Vuniwaqa is a mother, a career woman and above all, a committed police officer. In her professional life, she’s shattered many a glass ceiling and she does so with empathy, grace and steely determination.

The first woman to be chosen to lead the Police component of the world’s largest peace operation, the United Nations Mission in South Sudan (UNMISS), Police Commissioner Bolatolu-Vuniwaqa has been a beacon of inspiration and leadership not only for UNPOL officers from 46 different countries under her command, but also for her civilian and military colleagues.

As she reaches the end of her fruitful tenure with UNMISS and prepares to return to her beautiful Pacific island home, Fiji, she shares with us the highs and lows of being a peacekeeper and a leader.

Q: Tell us a little bit about your journey from a young woman applying for a policing career in Fiji to now being the Police Commissioner in the world’s largest peacekeeping mission.

PC: Growing up in Fiji, we only had teachers we looked up to. So, policing was never my first career choice; I, like many other young girls, wanted to teach. As I continued my education, my dreams of becoming a teacher didn’t materialize and then, almost as a default, I applied to the police service in my country. I was one of 10 women in a class of 100 new recruits and ended up winning the Baton of Honour for the best all-round performer. I became the first female cadet in the organization, and this set the stage for my career in policing, up until now.

Of the 10 women who joined the police at the same time as I did, only two of us are continuing our service. Looking back, I think being a police officer was my destiny and it has certainly been the most enriching experience of my life.

Q: In terms of your time at UNMISS, what in your opinion are some of your achievements?

PC: When I joined UNMISS, one of the things I set out to do was to give UNPOL a long-term vision. Protecting civilians in conflict zones isn’t a short-term or stop gap endeavor. It must be a sustained intervention. Therefore, my team and I identified two key areas —increasing our own operational effectiveness and providing in-depth technical advice and assistance to the South Sudan National Police Service.

I think one of our biggest successes has been forging relationships of trust with our local policing counterparts and finding entry points where we could build their capacities. I’m very proud to say that we have trained more than 10,000 SSNPS officers since 2019.

Additionally, UNPOL played a critical role in last year’s re-designation of UN Protection Sites into camps for internally displaced people. We worked day and night with local police to hand over patrolling and protection responsibilities. We still co-locate and co-patrol with them—it’s a very productive relationship.

Moreover, we’ve used the mission’s Quick Impact Projects programme to build police stations and police posts in areas where local police had no facilities at all. I think this has been massively fruitful in extending the reach of the SSNPS in strategic areas, ensuring they have the space to engage with communities, especially women. This is one of our major specifications—we make sure there is a space for gender concerns to enable women to come in and report anything untoward to the police.

Speaking of gender, we do practice what we preach. We have increased the number of women in our ranks—women now constitute 35 per cent of Individual Police Officers, another thing I’m very proud of. This has really provided a new dimension in our policing capacity as UNPOL since we’re boosting our own gender-responsiveness.

Q: What is one major challenge that you’ve faced in your role?

PC: I am passionate about capacity building and one of the main challenges we face is hugely under-resourced local police. I have advocated for them within the mission as well as with government counterparts. For the South Sudan National Police Service to effectively serve and protect communities across this young nation, they must be given more resources. I believe that given the empowerment and the resources they need local police will most definitely be able to make communities at the grassroots feel safe.

Q: What makes you so committed to building capacities among local police?

PC: Very simply put, building local law enforcement capacities is the only way we can ensure continuity for what UNMISS is currently doing on the ground—protecting civilians and building a durable peace. This legacy can be carried forward if we train them, empower them so that peace can be sustainable in the long term.
When I joined UNMISS, I was immediately struck by the need to build trust with my South Sudanese policing counterparts. You can’t achieve this overnight; it needs time and develops progressively. That’s what I’ve tried to do at my level and simultaneously cascaded this philosophy all the way down to our UNPOL teams in field locations. We’ve sustained this rhythm and now come to a point where I meet with my South Sudanese counterpart every week! That’s how well we have fashioned bonds of trust and cooperation.

Q: You’ve spoken about gender dimensions earlier. What are your impressions of how women and girls have suffered but also showed resilience in the face of conflict in South Sudan?

PC: I first came to UNMISS as an Individual Police Officer and I worked in the [former] Protection of Civilians sites during the 2016 crisis. After the crisis, I noticed that the men mostly stayed within the site while women were going out to collect firewood, to get food. This was alien to me because in Fiji, it’s the exact opposite—women are sheltered while men venture out. I started asking questions because I couldn’t comprehend the dynamics.

I was surprised with the answer: A group of women I was conversing with told me that when women and girls go out of the sites to provide for their families, there’s always the risk of rapes or attacks, but they won’t be killed. But for the men, there are no two ways about it—they will most definitely be killed. This conversation changed my entire perspective about South Sudan and it just goes to show how resilient the women here are. They will sacrifice anything for their families and are immensely strong.

Q: Is there any advice you might have for young women wanting to make a difference to people’s lives in conflict-affected countries?

PC: Coming to a conflict zone isn’t easy but I really would like to encourage women to be part of peacekeeping missions. I’d say the most important thing for young women, or even men, is preparedness. Learn about the country, read about the culture and when you get here, be ready to contribute from the very first day. You might face hardship, but it will enrich you more than you can imagine.

Q: What’s a leadership lesson that you’ve learnt in UN Peacekeeping that’s unique to being a female leader?

PC: I feel emotional intelligence is something we must all inculcate. It’s something I’ve fallen back on time after time as a Police Commissioner. Particularly as women leaders, if we use it well it can enhance our leadership abilities. We will be able to build a good team, a team that is formidable, that comes together in times of crisis. We’ll also be able to make good decisions because we know the environment around us, we are keenly self-aware, and able to relate to people at all levels. Empathy is very much part of it as well.

PC: I think the greatest risk I’ve ever taken was to join UNMISS. I was Assistant Police Commissioner in my country, and I had hit the glass ceiling. I was looking for a lateral exit and always had my eye on UN Peacekeeping since I had never served in a peace operation before. As I mentioned earlier, I first came to UNMISS as an Individual Police Officer; it was a big gamble to take a step down from the Assistant Commissioner level but I learnt everything from the ground up—I did night shifts, went on patrol, handled access duties. And then, I built myself up again and here I am, leading a massive, diverse, multicultural team of committed police officers. The risk paid off!

Q: Whether in terms of decision-making or judgement calls in tough situations, or as a leader, how do you stop yourself from second-guessing or doubting yourself?

PC: As leaders, we have people around us who are experts in their own fields, and this is one of the aspects of leadership that I’ve learnt—to consult. I know that time can be of the essence in some situations, but I try to get advice from all the capable colleagues I work with before taking major steps.

Q: What personal sacrifices have you made throughout your career?

PC: Leaving my children behind has been a huge sacrifice and I’m sure I have that in common with many career women with families. Missing out on birthdays, missing out on very important dates, particularly in our children’s lives, is something that can’t ever be compensated. I left my youngest daughter when she was just starting high school and now, I will be going back to her when she is in university. I’ve missed a huge part of her formative years. But, to achieve anything of worth, there will always have to be sacrifices and compromises.

Q: Do you think a woman in peacekeeping can do it all – have a family, pursue her career and climb the ladder?

PC: Absolutely, if she has a strong network of family, friends and colleagues. I am immensely grateful to my own family for the unstinting support they have given me

Q: How important, in your opinion, are women to achieving durable peace in South Sudan?

PC: Women are critical to achieving a sustained long-lasting peace. The voices of women must be heard and included in ongoing peace processes because we bring to the table dimensions that may not even be considered in our absence. Women are natural peacebuilders and it’s vital that we are included when it comes to peace talks, peace implementation and peacebuilding. We constitute 50 per cent of society. Our needs must be considered, and our opinions must inform decisions that impact us directly