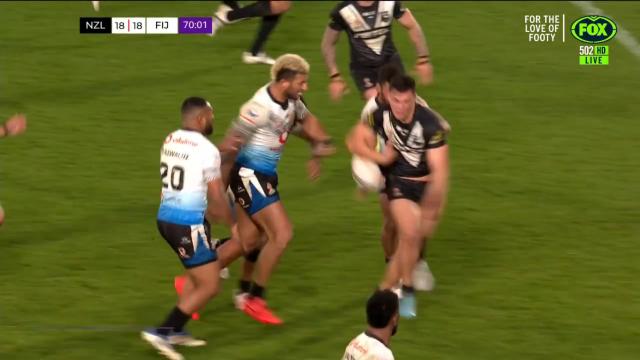 New Zealand scraped to 18- 22 victory over Fiji in a tight World Cup quarterfinal after the Kiwis were awarded a controversial penalty for a strip on fullback Joey Manu.

In the 70th minute as the scores sat 18-all, Manu charged into the line and looked to have clearly lost the ball as referee Gerard Sutton signalled a knock-on.

The Kiwis called for a captain’s challenge and after a lengthy review Bunker referee Tom Grant ruled the ball was stripped by Viliame Kikau.

Both commentators were convinced Kikau didn’t strip the ball from Manu’s grasp as Jordan Rapana slotted the penalty goal to take the lead.

“He has dropped the ball Joey Manu, he just lets go, I don’t think there is a pull on it,” the commentator said.

“It is a penalty also right in front of the sticks, this is a cruel, cruel twist of fate for Fiji isn’t it.”

Fox League’s Corey Parker labelled the decision the “pivotal moment” of the game after the Bati held a 12-6 halftime lead.

“There’s the pivotal moment right there, I personally don’t believe it was a strip, the referee and the Bunker found it to be a strip there from Viliame Kikau,” Parker said.

“Off the back of that Jordan Rapana, a very important kick, was able to get a two-point buffer.”

Fox League’s Yvonne Sampson also questioned if Fiji were “robbed of their World Cup” as Greg Alexander slammed the implementation of the captain’s challenge.

“It was a big call, it was a captain’s challenge because Gerard Sutton on-field ruled it as a loose carry from Manu,” Alexander said.

“We then saw a thousand replays to try and come to a decision, and I don’t know what the English fans think of the captain’s challenge, but it has driven me crazy this World Cup.

“We watched endless replays to try and come up with that decision and I thought they came up with the wrong one there.”.