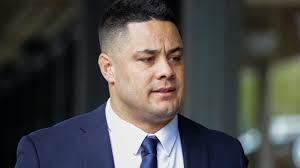 NRL superstar Jarryd Hayne has been told by a judge a jail sentence is “inevitable” after he was found guilty of sexually assaulting a woman at her Newcastle home two-and-a-half years ago.

After three days of deliberating a jury on Monday afternoon found Hayne, 33, guilty of two counts of sexual intercourse without consent.

He was found not guilty of the more serious charges of aggravated sexual intercourse without consent, recklessly inflicting actual bodily harm.

The crown prosecution applied for Hayne to be taken into custody immediately.

But Hayne’s barrister Richard Pontello SC successfully argued for him to be given bail on the condition he hand over a $50,000(US$38,861) surety.

Judge Syme granted bail so that he could organise accommodation for his family and for psychological reports to be compiled.

Hayne will now face a sentencing hearing on May 6 in Newcastle District Court.

He is facing a maximum possible sentence of 14 years in jail.

Hayne pleaded not guilty and denied sexually assaulting the then 26-year-old woman at her home at Fletcher, on Newcastle’s outskirts, in September, 2018.

His first trial in Newcastle last year ended in a hung jury, however the jury of seven men and five women found him guilty of performing oral and digital sex on the woman without her consent.

During her evidence, which was replayed from Hayne’s first trial, the woman said she refused to consent to sex because the ex-Parramatta fullback had a taxi waiting outside.

He had been in Newcastle for a two-day buck’s party and had organised to pay a cab driver $550 to take him back to Sydney, where he was required to attend an event at Alexandria at midnight.

The woman, who cannot be named for legal reasons, said when she heard the taxi beeping outside her bedroom window she resolved there was “no way” she was going to consent to sex.

“Like my heart dropped because I felt like he had only come there for one thing,” she said.

“Like why would you get (the taxi driver) to wait outside for you for 20 minutes.

“I felt saddened because I felt like he must have only seen me in one type of way.”

She said the presence of the taxi made her feel “like absolute crap” and “sad and stupid for flirting with him to start”.

“He doesn’t want to meet me or have a conversation.”

The pair had communicated via social media for several weeks leading up to the incident but had not met face to face before the evening of September 30 — the same night as the NRL grand final.

Hayne was drinking on the taxi ride to the woman’s house and left the empty bottle of a pre-mixed alcoholic drink on the letterbox.

He said he went into the woman’s bedroom and lay on her bed where he attempted to serenade her by singing along to some of his “go-to” songs on YouTube, including an Ed Sheeran cover of Oasis’s Wonderwall.

According to the woman, he forcibly kissed her during and pushed her head into the pillow.

She described being overpowered by Hayne, who she said pulled off her jeans before sexually assaulting her despite her attempts to stop him.

She described his actions as being: “Forceful and fast, that’s why I can’t say for sure how the injury was done.”

The woman suffered two lacerations and began bleeding about 30 seconds into the sexual encounter.

A video recorded by the complainant, which was played to the jury, showed her bed and pillows covered in blood.

While Hayne got up to wash his face in the bedroom’s ensuite, the woman got in the shower and said that the injury was “stinging like mad” as she watched the water run red down the drain.

After asking if a $50 note on the bed was hers, he left on the trip to Sydney.

Soon after, the woman sent him a string of text messages saying “I am hurting so much” and “I know I’ve talked about sex and stuff so much but I didn’t want to do that after knowing the taxi was waiting for you”.

She also messaged another friend saying he was “rough” and that he “ended up getting his hand down there”.

“I said ‘stop’ and stuff and then I kind of just let it go because he was so into it and pushy,” she said.

“I just feel like I let it happen to myself by not screaming at him.”.

Devils made to fight against PNG Hunters with 38-22 win