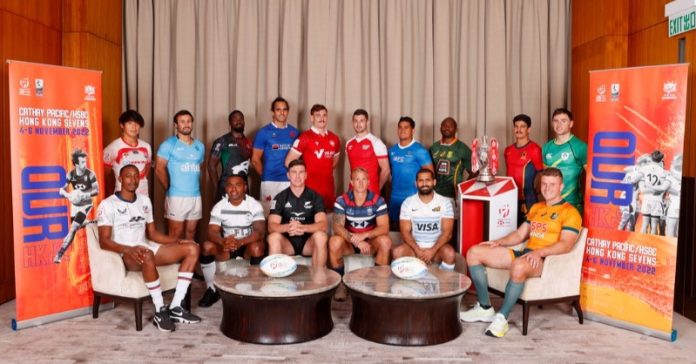 A little over two months after Australia claimed the 2022 title, the HSBC World Rugby Sevens Series 2023 will get underway in Hong Kong this weekend.

If that seems like a swift turnaround, fans have had to wait a lot longer for the return of the ‘bucket-list’ Series tournament that is the Cathay Pacific/HSBC Hong Kong Sevens.

It is now more than three and a half years since Fiji won the most recent Hong Kong Sevens title, their fifth in succession.

The impact of the ongoing COVID-19 pandemic has ensured that the Series has not returned to Causeway Bay since, but the wait is almost finally over.

Each of the 16 teams that will compete at Hong Kong Stadium this weekend have made their way to the city as anticipation for the tournament, and the 2023 Series, reaches fever pitch.

Pandemic-related restrictions remain in place for the tournament, but with up to 34,000 fans set to fill the stands at Hong Kong Stadium to watch the world’s best players, we are surely in for a treat.

Eight members of that squad, as well as three survivors of the successful Hong Kong campaign three years ago, have been retained for this weekend’s tournament.

Jerry Tuwai has been given an extended break to rest and recuperate, while the squad contains three players who will make their Series debut in Hong Kong.

Coach Ben Gollings hopes his squad has a good mix of youth and experience but understands the country’s relationship with the competition brings with it a certain amount of pressure.

“Hong Kong Sevens is a pinnacle event, but none more so than for Fiji where there is a huge amount of support and they have won it back-to-back five times in a row which is an incredible record,” Gollings said.

“There is an expectation that we will go fight to keep that record alive and make it six in a row. We are just building now to go [to Hong Kong], which will be a good experience for these players.”

Fiji, drawn in Pool C alongside the USA, Japan and Spain, finished the 2022 Series just four points from the title, which was won by Australia for the first time.

Australia’s title defence will be tested from the opening day, having been drawn in Pool A alongside New Zealand, Samoa and hosts Hong Kong.

The champions will begin their 2023 Series campaign against the home side in Friday’s final match, which is scheduled to kick-off at 19:03 local time (GMT+8).

Hong Kong’s Max Denmark cannot wait to test himself against some of the best players on the circuit.

“Being realistic we’re playing Australia, New Zealand Samoa [in Pool A], so it’s gonna be some tough days at the office, but I think we can surprise people,” he told the South China Morning Post.

“On Friday, we’re playing at 7pm, it’s our home ground, it’s our first game of the tournament. I know it’s also theirs but I think we can go and put a statement out there.”

This year is the 20th anniversary of England first winning the tournament in Hong Kong, but the four-time winners will not feature this weekend, or on the Series.

Instead, England, Scotland and Wales will be replaced by Great Britain, who will compete at a Series event in Hong Kong for the first time.

They have been drawn in Pool B alongside South Africa, who finished the 2022 Series as runners-up and won Commonwealth Games gold, France and new core team, Uruguay.

In August, tries from Felipe Etcheverry, Bautista Basso and Valentin Grille gave Uruguay a 19-5 win against Georgia in the World Rugby Sevens Challenger Series 2022 final in Chile to book their place on the 2023 Series.

Los Teros will open their season against South Africa and will hope to continue their rise as they compete at a first Series tournament in more than four years.

The weekend’s action will get underway at Hong Kong Stadium at 15:40 local time (GMT+8) on Friday when Ireland take on Pool D rivals Kenya.

Argentina, who finished fourth in 2022 having been in contention for the title heading into the final tournament in Los Angeles, then play Canada in the second match of the opening day. You will not want to miss any of the action.