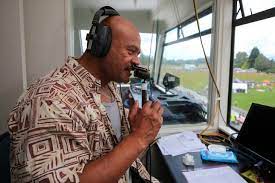 Former rugby international and sports broadcaster Willie Los’e has died at the age of 55.

Los’e – who died in South Africa where he was due to commentate the Rugby World Cup Sevens tournament – played for the New Zealand under-21 side and later captained Tonga at the 1995 Rugby World Cup, playing all three pool games.

In a statement, his family said he was “a proud West Aucklander”.

“The Los’e whānau would like to thank Karl Te Nana, Bailey Mackey and World Rugby boss Steve Jamieson for contacting us directly from South Africa this morning relating to the sudden passing of our brother Willie.

“We ask that as a whānau, we be given time to process and work through our devastating loss and the logistics of repatriation of our brother, father, uncle, son home. We are awaiting details from Cape Town.

“Thanks to Steve Jamieson who has spoken to the New Zealand High Commission, who will be heading to Cape Town tomorrow to help with the repatriation of Willie’s body to bring him home to Aotearoa.

“We as a whānau are thankful to all Willie’s friends from around the world who have sent their condolences and support.

Playing as a lock and loose forward, Willie Los’e represented Auckland, North Harbour and Marlborough in the old National Provincial Championship from 1990 to 2001, while having a stint in Japan with Yamaha Jubilo.

After his playing career, Los’e was a host with Radio Sport and ZB, and a rugby commentator for Gold Sport and Sky TV.

Los’e attended Kelston Boys High School where he was Head Prefect and played alongside Va’aiga Tuigamala in the 1st XV.

His family said captaining Tonga had been a career highlight.

That was backed up by his comments in an interview with fellow rugby commentator Keith Quinn on Quinn’s blog.

“Firstly, I’ll go for two of my very proudest moments? That’s easy. Becoming a dad for the first and second time were days I will never forget. Then in a rugby sense playing my first test at the Rugby World Cup in South Africa in 1995. It was Tonga v France at Loftus Versfeld Ground in Pretoria. I cried right through the Tongan National anthem – I just wished and wished my parents had been still alive to have been there.”

Quinn also asked Los’e about his motto in life. “I’ve always liked the little expression I heard first years ago; ‘Put your hand Up not out.’ I reckon that has worked for me.”

And his idea of perfect happiness? “Being with mates, friends and family with lots of love and laughter…Perfect!”

NZME chief radio officer Jason Winstanley said Los’e had been a respected member of the Radio Sport and Newstalk ZB teams, renowned for his humour and generosity.

Los’e had been commentating and providing expert analysis for Gold Sport broadcasts of this season’s NPC rugby matches.

“Willie was a fixture on the airwaves for many years – his love for the sports he covered was clear to all listeners,” said Winstanley. “He brought unique insights to rugby analysis and was especially supportive and encouraging of young staff”, he said.

Luatua is one of two former All Blacks in Samoa tour...