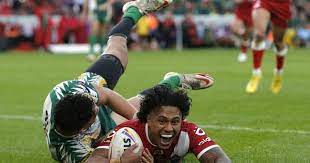 -Parramatta centre Will Penisini scored four tries for Mate Ma’a Tonga as they registered their biggest ever Test win by beating Cook Islands 92-10, securing top spot in Group D in the process.

Daniel Tupou crossed inside the opening minute, and from there Tonga piled on 15 more tries, with skipper Jason Taumalolo enormous in his first game of the tournament following suspension, scoring two tries and running for 171 metres in the middle.

While the contest was over by halftime, at which point Tonga led 52-0, Cook Islands did bounce back to score a couple of tries in the second half, but had no answer for their ruthless opponents on the day.

In a game in which they enjoyed 64 percent of the possession, Tonga ran for almost 1200 metres more than Cook Islands and completed all but four of their 36 sets.

Tesi Niu is credited with the try, but this one also involved some lovely build up play from teammates. Sione Katoa’s patient, tackle-breaking run to find a gap sent Mosese Suli through, at which point he turned on the gas and put on some nice footwork to break the line, before finding Niu looming in support.

“Very disappointing. I thought we competed really well our last two games and I didn’t see that coming to be honest. Apologies to our supporters and fans, it wasn’t acceptable. End of the day we didn’t turn up,” said- Cook Islands coach Tony Iro.

“I thought we were outstanding and had a different intent about us from the start. That was a lot more like us and certainly showed the class and ability we have got. I am comfortable with where we sit and think we have more left in us as well,” said- Tonga coach Kristian Woolf.

Tonga are through as Group D’s top side and will face either Samoa or France in the quarterfinals. Cook Islands head home having unfortunately saved their poorest showing for last.