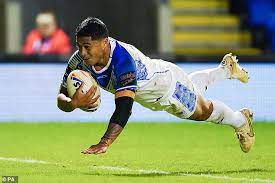 Toa Samoa are through to face Tonga in the quarterfinals after beating France 62-4 on Monday morning, with Panthers wing Taylan May scoring four tries in the win.

May scored a hat-trick in the first half and added another in the second, equaling David Nofoaluma’s record for most tries in a match for Samoa, before being rested for the final half hour of the match in Warrington.

Although Samoa scored after just three minutes, and the final scoreline is evidence of a dominant win, the opening exchanges were absorbing and France showed they were up for the fight, with some nice goal-line stands defensively.

But the physical toll of tackling the star-studded Samoa pack appeared to show midway through the first half, and at that point May caught fire, with three tries, all of which were converted by Stephen Crichton, giving Samoa a 28-0 lead at the break.

Another six tries in the second period blew the final scoreline out.

“Pretty happy to win any Test match by that scoreline. I thought our forwards were enormous, particularly that first 20 minutes, they certainly laid the platform, and we have got some backs that can capitalise on that and they certainly did,” said- Samoa coach Matt Parish.

“I don’t want that scoreline to summarise our World Cup. We have to put the scoreboard in context. Samoa won the ruck all the time and we couldn’t control it, and they are hard to handle. We will keep on building- [for the next World Cup],” said France coach Laurent Frayssinous

Samoa are through as the second-placed team in Group A and will play Tonga in the quarters, in what shapes as one of the games of the tournament. For France the 2021 tournament comes to an end, although they’ll take plenty of positives from their performances ahead of hosting the tournament in 2025.