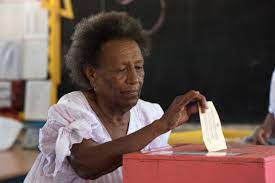 The South Pacific island nation of Vanuatu will hold a snap election today with six former prime ministers contesting the poll, after parliament was dissolved in August to avoid a vote of no confidence in the government, said local media.

Opposition leader Ralph Regenvanu of the GJP Party has accused Prime Minister Bob Loughman of attempting to make “dangerous amendments” to the Vanuatu constitution in June by proposing a shift from a four-year to five-year election cycle and limiting the chief justice to a five-year term.

Loughman will contest the election and his Vannua’aku Party has campaigned by pointing to his government’s track record of development since elected in 2020, compared to the previous eight years of government.

Vanuatu’s parliament was dissolved in August and court documents show an application to have the dissolution overturned was supported by 27 out of 52 lawmakers, but was dismissed by the Supreme Court last month.

With the government in caretaker mode, Vanuatu was unable to send a leader to the White House for a meeting between Pacific Islands and Joe Biden, where the United States pledged more cooperation to stave off China’s “economic coercion”, and was instead represented by its U.S. ambassador.

Counting of votes on Thursday will be broadcast on a radio livestream, continuing a transparency measure introduced at the previous election in 2020, when COVID-19 restricted the involvement of international observers, he said.

Australia has provided finance, a military transport aircraft and two helicopters to assist the electoral office transport ballot boxes and staff to 18 constituencies across almost a dozen islands.

At the United Nations, Vanuatu has led a campaign by Pacific islands for the international court of justice to consider the human rights impact of climate change on populations.