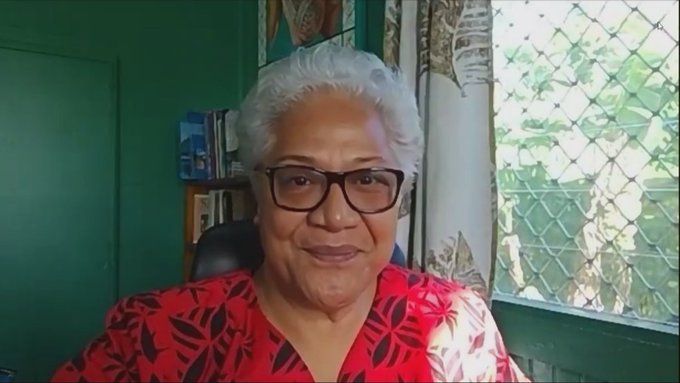 Fiame Naomi Mata’afa described Monday as an “incredible day” and she looked forward to leading Samoa through challenging times, in a statement that all but claimed victory following two decisive Supreme Court victories.

Mata’afa’s comments came late on Monday after the Faatuatua ile Atua Samoa ua Tasi (FAST) party successfully challenged two attempts to interfere with the results of a 09 April election which had delivered her an electoral majority.

The effect of the court’s decisions was to instruct that Parliament be convened and to restore FAST’s original 26-25 seat majority.

“Today was an extraordinary day for Samoa,” the party leader said in a statement.

“Today all confusion, all uncertainty and the created ‘deadlock’ was broken by the Court, along with all attempts to undermine the votes of the people.

FAST’s leader confirmed she will invite the Clerk of Parliament to make the arrangements to convene Parliament and swear in the 51 representatives elected on the 09 April election.

“I and the FAST Party look forward to the opportunity to lead our country through these pressing times,” she said.

“I expect a meeting of Parliament to be convened immediately, with all the flexibility now given to us to do so under the Emergency Orders.”

Mata’afa also invited public sector executives and staff to continue to undertake their duties impartially as the nation, she said, began to “transition to a new administration and to ensure that process is smooth and efficient.”

In an election in which she had been accused by opponents of seeking to disparage the independence of the judiciary, Mata’afa said Monday’s court action reflected the party’s total faith in the judicial system and the Chief Justice.
“We honoured and used the process set out for us all, in the Constitution, to ask the Supreme Court to decide whether what was done was right, whether it was according to the law, and whether it was legal,” she said.

“We filed these two cases because we felt that what was done, was wrong and was not in accordance with the Constitution and Electoral law.”

Shortly after noon on Monday Justice Lesatele Rapi Vaai handed down a decision together with Justice Vui Clarence Nelson and Justice Niava Mata Tuatagaloa voiding action by the Office of the Electoral Commissioner to expand the size of Parliament.

The decision restored FAST’s original majority from the 09 April election which gives it control of 26 seats on the floor of the Parliament compared to the Human Rights Protection Party (HRPP) with 25.

“The Rule of Law prevailed and was declared over our land,” the former Deputy Prime Minister, who quit the party of Government to start a successful opposition movement just nine months ago said.

Hours later, the Supreme Court again handed down a decision, overruling a declaration by the Head of State voiding last month’s elections, something it said had no legal authority.

The Chief Justice, Satiu Simativa Perese handed down the decision of a panel of Justices on Monday afternoon.

The court “directed” the “attention” of the Head of State to his constitutional obligation to convene Parliament within 45 days (that expires next Monday) after April’s General Election.

“Today was a celebration of the way in which a dispute over what is right, should and can be resolved in a peaceful and ordered manner,” Fiame said.

“We now have answers to our cries for relief.

“We all must now obey and act in accordance with the Law.

“I thank the people of Samoa for their patience, forbearance and dignity, during unsettled times.”

“If all things go to the lines where they are, we should see the first female Samoan prime minister come next week,” Dr Carter told ABC.

She would also make history in the Pacific, becoming just the second female head of government in the region, after Hilda Heine became President of the Marshall Islands in 2016.

“We of course respect within the Pacific the outcomes of any democratically led election but it is certainly a meaningful thing when you see a historic decision made, when office is held by a woman,” she said.

Unofficial close margins can be swung by special votes in Samoa