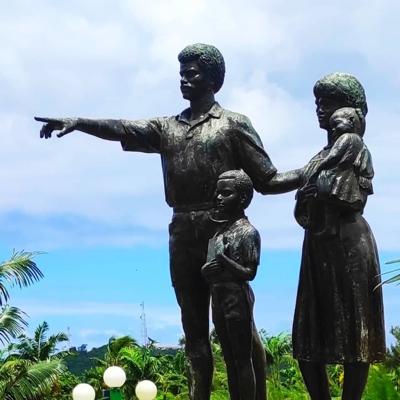 The former Vanuatu Leader of the Opposition, Ralph Regenvanu, has labelled the decision of the Council of Ministers (COM) to request the President to dissolve Parliament as grossly irresponsible and reckless.

Regenvanu says that COM’s decision to dissolve Parliament only halfway through its term, as well as being a totally selfish and self-serving act, also demonstrates their complete disregard for the welfare of the people of Vanuatu.

This is due, he says, to the enormous cost of the dissolution which is un-budgeted for.

“As well as the 100 million budget that the Electoral Commission has stated is required for the actual election process, the Government will also need to pay out over 227 million vatu (US$1.9 million) in gratuities for the 51 former Members of Parliament. So the cost of this dissolution will be nearly 350 million vatu (US$2.9 million.

“The people of Vanuatu are crying out for better roads, better health and education services, and yet the Prime Minister and his Ministers have shown utter and complete contempt for the people by imposing this completely unnecessary enormous additional expense ahead of the needs of the population.

“In terms of cost”, Regenvanu states, “a change of Prime Minister and the executive is vastly cheaper than a dissolution and general election.

“The main financial cost of a change of government are gratuities for the office-bearers (Prime Minister, Ministers, political appointees) and these are all already included in this year’s budget as they are calculated and paid pro rata. The cost of a new general election and gratuity payments to MP’s is not, however, included in the 2022 budget.

“Now the Government will have to scratch around and access all pockets of funds it can find that have been allocated to be used for service delivery — and should be prioritised to meet the development needs of the population — and will have to reallocate these towards the costs of this dissolution.

“If the Government has any reserves at all, these will be plundered.

“I hope the Government will not incur additional debt to meet the costs of this dissolution.

“There is absolutely no public or national interest grounds or reasons for Parliament to be dissolved at this time.

“We are just over halfway through the 12th Legislature and Parliament still has at least 18 months to go to complete its four-year mandate.

“There has been a single Prime Minister until now, and if the motion had been successful it would have been the first change of Government in this legislature.

“There are valid reasons why the Prime Minister has lost the confidence of the majority of the members of Parliament, and five of them were listed in the motion that was ready to be debated before Parliament only hours after the dissolution,” Regenvanu says.

He says “it is extremely cynical that just last week the Government said it could no longer afford to pay a very meagre allowance to VNPF-sponsored students, yet this week COM has made this decision to create a completely unnecessary enormous additional expense ahead of the needs of the population.

“That is why I say that PM Loughman and his Ministers have shown an utter contempt for the people in deciding to dissolve Parliament.

“They would rather the needs of the entire population are put on hold rather than lose the personal benefits and privileges their positions gives them. It’s shameful and a disgrace”.

In response to these claims, Public Relations Officer (PRO) of the caretaker PM, Fred Vurobaravu called on the former MPs in the Opposition “not to cry over spilled milk” as the Parliament has already been dissolved.

He pointed out that there are no valid reasons to justify their grounds for the Motion of No Confidence in PM Loughman.

“It is not fair for the Opposition to judge the government, especially when it does not perform to its full capacity due to the COVID-19 Pandemic. Our borders were opened just last month, following two years of lockdown,” Vurobaravu stressed.

The government had submitted a request to the Head of State to dissolve the parliament.

“It is not fair at all to sign a motion of no confidence in the government, just a month after the borders restrictions were lifted,” he reiterated.

Had there been no pandemic, and the government had failed to perform as expected, then it would accept to face the motion.

PRO Vurobaravu said the motion was put forward only for the sake of the political interests of some of the former MPs who were with the government, but not based on national interests.

He said even if the motion had passed, there is no guarantee that the new government would maintain stability.

“If the leaders cannot maintain the political stability, it would be better to let the people decide their next leaders,” the PRO added.

In relation to the costs highlighted by the former Leader of Opposition, said the government would fund the election.

If there is a need to seek funding from “outside” the government would do that, he said.

It is the duty of the government to ensure the election is carried out transparently and in accordance with the law, he added.