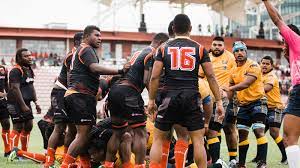 The tournament returns for the first time since 2019 following a covid induced hiatus and will feature national teams from the Solomon Islands, Vanuatu and hosts Papua New Guinea. This year’s tournament will see Vanuatu make a return having not played in an Oceania Rugby Senior International Men’s competition since 2007.

The Oceania Rugby Men’s Championship has served as a Rugby World Cup qualification tournament since 2009.

A concerted effort sees the tournament return to Papua New Guinea this year with Oceania Rugby focused on establishing International XV’s rugby across development and performance unions, Oceania Rugby Interim General Manager Wayne Schuster said that whilst a small participation number in this year’s competition it will hopefully reignite regular and meaningful competition pathways for all unions.

“We know there is a vast amount of rugby talent and potential across all of our Pacific nations, tournaments like this only serve to grow and develop the XVs game in all unions.

“COVID has somewhat stalled our progress in this area, so we earnestly look forward to what the Oceania Rugby Men’s Championship will bring to our performance and development Unions.

“We are sincerely grateful to Papua New Guinea Rugby Union and the country of Papua New Guinea for their determination in hosting the 2022 Oceania Rugby Men’s Championship, and we are excited with their vision to grow the competitiveness of the XV’s game not only in Papua New Guinea, but also across other nations in the region,” Schuster added.

The competition structure will see one main pool and round-robin playoffs with the first round to begin on Wednesday 19 October.

In an ongoing commitment to leaving a lasting impact following all Oceania Rugby tournaments targeted professional development opportunities will be run in conjunction with the Oceania Rugby Men’s Championship for High Performance Coaches, Strength and Conditioning Coaches and Match Officials.

All matched will be broadcast on EMTV with tickets starting at K10 (US$2.85).