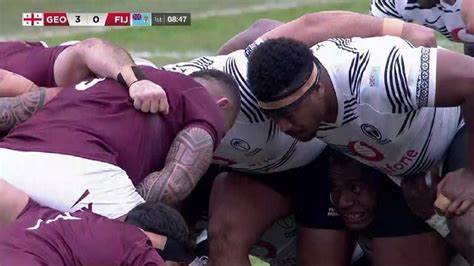 Vodafone Flying Fijians were held 15-all by a tough Georgian side in its final Northern tour test match in Madrid, Spain.

The Lelos made a perfect start in the first half and proved too strong for the Flying Fijians in every aspect of the game. Their forwards were on the right track, outplaying the visitors in the majority of the set-piece plays.

Tedo Abzhandadze was the hero of the match getting all 15 points off the tees, successfully converting five out of six penalties in the game.

Flying Fijians were made to work harder every time they had the ball in hand. A try each to Aminiasi Tuimaba and Viliame Mata with one successful conversion and a penalty from Ben Volavola contributed to Fiji’s points on the scoreboard.

Flying Fijians captain Waisea Nayacalevu said it was a tough battle against a powerful Georgian side.
“We know that we did not execute a lot of our game plan which caused a few penalties and we knew Georgia would take advantage of it.

We will take the learnings out of this game and move ahead in our campaign towards the Rugby World Cup in 2023” said Nayacalevu.

The Vodafone Flying Fijians wrapped up its November tour with a 43-13 win against Spain, went down to Wales 38-23 and played to a 15-all draw against Georgia.