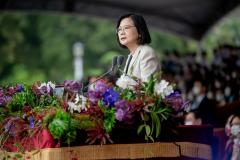 Taiwan’s President Tsai Ing-wen has refused any reunification overtures from Beijing, using her National Day address on Monday to say ‘sovereignty, democracy and freedom’ and NOT war, are the foundation for resuming any constructive interaction across the Taiwan Strait.

And, she’s warned her administration will not be intimidated by escalated military operations, diplomatic pressure, trade obstructions and attempts to erase the sovereignty of Taiwan, as an independent nation.

Celebrations to mark the 111th independence day in the capital Taipei Monday included a rare show of Taiwan’s defence capabilities – parading a range of its weaponry including missile launchers and armoured vehicles.

President Tsai said strengthening Taiwan’s defences is cornerstone of her administration to enable it to mount a more credible deterrence to China.

“Taiwan is increasing mass production of precision missiles and high-performance naval vessels, and working to acquire small, highly mobile weapons that will ensure Taiwan is fully prepared to respond to “external military threats”, she added.

“We must ensure that our preparations, supplies, and personnel can be resiliently, accurately, and promptly deployed to address any situation, whether in times of peace, disaster, or war.

The Taiwanese leader didn’t mince her words when she declared “we have no room for compromise” and urged her people to ‘defend our national sovereignty and democratic way of life.’

“I want to make clear to Beijing authorities that armed confrontation is absolutely not an option for our two sides. Only by respecting the commitment of the Taiwanese people to our sovereignty, democracy and freedom can there be a foundation for resuming constructive interactions across the Taiwan Strait.”

President Tsai also highlighted information warfare as a means to sabotage and interfere with the island nation’s democratic system.

“Going forward, we will continue to strengthen fact-checking mechanisms targeting disinformation, enhance the transparency and accessibility of information, and help our people more effectively distinguish fact from fiction to neutralize the threat of information warfare, said President Tsai.

Palau’s President Surangel Whipps Jnr was the only leader from the Pacific at the National Day celebrations in Taipei. He offered his strong backing to Taipei against mounting aggression and pressure from Beijing.

“The people of Palau deeply value the friendship between our two nations and are committed to supporting Taiwan despite the mounting aggressions in our region,” Whipps conveyed to Taiwan President Tsai Ing-wen at a welcome ceremony last week.

“In face of attempts by nations to change the international status quo by force, we must continue to work together and encourage international cooperation in order to ease military tensions,” he added.

Taiwan has faced increased military pressure from China, especially since Beijing staged war games near the island in August after a visit to Taipei by U.S House Speaker Nancy Pelosi.

Palau is one of the four remaining Pacific nations that have diplomatic relations with Taiwan. The other three countries are Marshall Islands, Nauru and Tuvalu