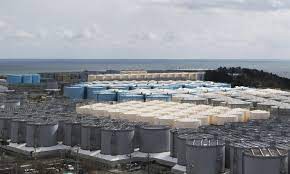 Environmental concerns were high on the list of issues to be addressed at the recent three-day Pacific Islands Conference of Leaders, held in Honolulu from 12 to 14 September with Japan’s decision to release up to 1.25 million tons of water from the Fukushima nuclear plant into the Pacific Ocean one of the most pressing concerns.

That is a position shared by many of Japan’s neighbours in Asia, with the governments of China, Russia, Taiwan and both North and South Korea expressing their opposition to the plan to dump water contaminated with radioactivity after the March 2011 earthquake and tsunami into the ocean.

The water became contaminated with radiation when it was used to cool three of the six reactors at the plant that suffered meltdowns after being damaged in the March 2011 earthquake and tsunami. Groundwater is also seeping into the basement levels of the reactor buildings, with an additional 120 tons of water accumulating every day.

Heads of government and senior ministers representing 16 Pacific nations and territories discussed the treatment of water that has built up in thousands of steel tanks on the grounds of the crippled Fukushima plant, efforts to remove the radioactive contaminants through the Advanced Liquid Processing System (ALPS) and the plan to ultimately release the water about 1 kilometer offshore through a pipe that is presently being constructed.

Environmental groups have long charged that this plan risks a serious impact on the natural environment, with local fishing and farming communities strongly opposed to the measure.

Last year, cesium five times above permitted levels was detected in fish caught off the northeast of the prefecture, even before releases commence. A local fisheries cooperative said cesium – considered one of the most dangerous radionuclides because, when ingested, it can build up in muscle, fat and bone and cause malignant tumors – was detected in fish caught at a depth of 24 meters about 9 km off the town of Shinchi.

In late July, Japan’s Nuclear Regulation Agency (NRA) officially approved a plan put forward by the government and plant operator Tokyo Electric Power Company Holdings Inc, to discharge treated water into the Pacific. TEPCO and the authorities insist that harmful radionuclides are being stripped out of the water when they pass through the ALPS system, leaving only the tritium, although no independent verification has been permitted on the grounds that testing cannot be carried out on site and strict regulations need to be in place for samples to leave the plant because they contain radioactivity.

TEPCO only admitted in 2019 that efforts to remove varying amounts of 62 radionuclides – including strontium, iodine, cesium and cobalt – from the water through ALPS had not been completely successful, but the authorities insist that storage tanks at the site are already near capacity and there is limited space to construct new facilities.

Shaun Burnie, senior nuclear specialist for Greenpeace, says the refusal to permit third-party testing only serves to raise new concerns about plans to discharge the water into the ocean.

“Moving nuclear material always carries risk, but for the purpose of independent analysis it would be justified,” he said. “TEPCO has lost trust across society in Japan as well as in the international community, including in South Korea, and providing samples for analysis would be in their best interests – unless they are covering something up.

“There are many questions about the effectiveness of TEPCO’s ALPS technology, so providing samples that could verify their reports on content would go some way to demonstrating their commitment to transparency,” Burnie added. “It won’t remove doubts that they are covering up major issues at the site – but would be an improvement on the current situation.”

Hajime Matsukubo, secretary general of the Tokyo-based Citizens’ Nuclear Information Center, echoes concern over the release of the water, telling the Pacific Island Times that a number of alternatives were available and feasible.

“We disagree strongly with this decision and we believe there were many better options available to the government,” he said. “There are no reasons why more tanks could not have been constructed at the site.”

“Instead, they have chosen the option that is the easiest and cheapest,” he said. “I think this was always the plan as releasing the water was always going to be less costly than the alternatives.”

Under the proposal, the contaminated water will be diluted with seawater to levels that are one-fortieth of the concentrations permitted by Japanese law. With so much water to be released, it is estimated it will take several decades to empty all the tanks at the site.

Decommissioning of the three reactors that suffered meltdowns in the disaster is expected to take at least three decades to complete and possibly longer as removing highly radioactive material that has leaked from reactors has never before been attempted and poses countless challenges.