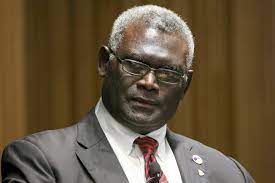 Australia and Solomon Islands are part of the Pacific family and have a strong security partnership, based on decades-long policing and maritime cooperation.

“Our relationship with Solomon Islands is incredibly important.

“As members of the Pacific Family, we are committed to working together to face our shared challenges and achieve our shared goals, including on climate change.

“I look forward to engaging with Prime Minister Sogavare on building a strong and prosperous Pacific region, based on principles of transparency, respect and partnership,” said Albanese in a statement.

It comes as the Australian Strategic Policy Institute says Beijing is attempting to influence public discussion in the Solomons through propaganda and suppressing information.

The institute says Chinese Communist Party officials are attempting to silence and coerce critics and media in Pacific Island nations.

“Across the Pacific, there’s a growing body of evidence to suggest that Chinese diplomats exert pressure to influence local publications and control press releases,” its new report reads.

The report also referenced Beijing pushing a “fabricated narrative” accusing Australia, the United States and Taiwan of instigating riots in Honiara during November 2021.

It comes amid heightened tensions between Honiara and Canberra after Sogavare accused Australia of foreign interference for offering to help fund the island’s election.

Allegations of Chinese slush funds influencing politicians in the Solomon Islands have also been levelled.

Honiara inked a security pact with Beijing in April, raising concerns about China’s growing influence in the region.

It also moved to strip any China references from a US-led accord with Pacific Island nations.

“There were some references that put us in a position where we’ll have to choose sides,” Solomon Islands Foreign Minister Jeremiah Manele told reporters in Wellington on Tuesday.

“We did not want to be placed in a position where we have to choose sides.”

Other Pacific Island nations like Micronesia and Fiji have also raised concerns about the pact, saying any security agreement should have regional consensus.

The Australian government maintains it is the Solomon Islands’ “security partner of choice” and security should remain within the remit of the region.