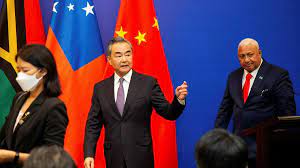 The U.S said on Tuesday that it was committed to supporting nations in the Pacific Ocean region. The words have come just a day after ten Pacific nations rejected a pact with China.

The U.S said Beijing’s own actions showed how opaque its offer was.

The rejection of the pact is being seen as a diplomatic setback to China.

State Department spokesman Ned Price reiterated that the United States, like Australia, had made clear its concerns that China had offered a “shadowy” deal with regional consultations.

In keeping with Secretary of State Antony Blinken’s tone on the U.S rivalry with China, Price did not gloat and said the Pacific islands made their “own sovereign decisions.”

“We are committed to continue deepening our relationship with our Pacific Island partners and in the Indo-Pacific, including working together to deliver for our people,” Price told reporters.

Price highlighted concerns raised by journalists in Fiji, Samoa and the Solomon Islands who covered the visit by Chinese Foreign Minister Wang Yi including a refusal to permit questions.

“When we talk about these opaque, shadowy deals, I think you need only look at… the PRC’s efforts to obscure these very deals,” Price said, referring to China.

Beijing attempted to 2even go so far as to prevent officials in the region from facing reporters in their own countr(ies),” he said.

China had proposed a pact that would include expanded training of Pacific islands’ police, conducting sensitive marine mapping and gaining greater access to natural resources.

Meanwhile, Chinese ambassador Qian Bo says security is never the focus for China in terms of its cooperation with Pacific Islands.

Bo was responding to questions from the media in terms of signing a security pact with some countries in the region.

He said that China’s partnership with Fiji and the region is a comprehensive one that covers education, development and trade.

“I would say that security is never the focus of China’s cooperation in the region. Security is part of the China-Fiji relationship, but it’s only part of it. Many countries we simply have no military cooperation at all because there’s no need. Why should we? So all the cooperation is based on request and necessity. “

Bo said part of their security agreement with some Pacific island countries includes the provision of police vehicles and training for officers.

Scott Morrison has not spoken to Solomon Islands prime minister since...