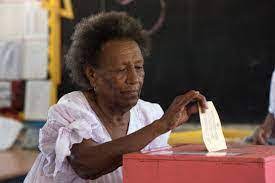 The total budget to run the upcoming Vanuatu snap election is VT150 million (US$1.2 million).

Chairman of the Electoral Commission, Edward Kaltamat, confirmed this Tuesday.

In addition to that, the Australian government has also stepped in to assist the Electoral Office.

Kaltamat said the staff of the Vanuatu Electoral Office is working hard in preparation for the Polling day on 13 October 2022.

The majority of individuals that have applied to run in the election had their names read out during the first reading, last Saturday.

Names of around 45 candidates have not been published due to outstanding debts owed to various institutions and government agencies.

They were required to sort out their unpaid debts within 72 hours from the date the first reading was made. They are obliged to settle their debts if they intend to contest the election.

The final list of names of the eligible candidates for the snap election was expected to be officially released by the Electoral Commission last night, after the 72 hours given to the remaining 45 applicants lapsed at 8pm.

Kaltamat, said the final hours were very busy for his staff and politicians as the deadline loomed.

Kaltamat told Daily Post earlier on Monday that the names of the 45 applicants were put on hold because their debts were not cleared with various institutions.

He said the 45 applicants were working to fix their debts, followed by screening by his staff to meet the deadline.

Kaltamat said some of them had fixed their debts, but it was not cleared by the department responsible and it was still recorded as a debt.

The clearance only concerns the remaining male applicants. The number of female candidates remained at seven, as they are among 180 official candidates who were declared eligible candidates so far by the Electoral Commission.

From the female contenders, Celine Bareus will contest in the Malekula constituency as an independent candidate, Vanessa Molisa under the Laverwo Movement on Maewo, Maryline Abel under Vanua’aku Pati on Tongoa, Julia Malas King as a Union of Moderate Parties candidate on Efate and Nadia Kanegai, Dorosday Kenneth and Evelyne Utisets in Port Vila constituency as independent candidates.

Among them, only Kanegai has already contested the election in Port Vila at one time, but she was unsuccessful.

Since Vanuatu’s independence in 1980, only five women have managed to get through and became Members of Parliament.

They were Maria Crowby and Hilda Lini in the constituency of Port Vila, Leinavao Tasso and Isabelle Kora, both in the Epi constituency and Eta Rory from Malekula.