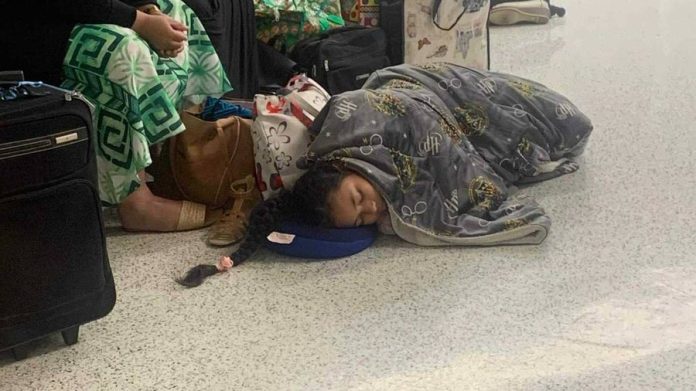 More than 100 passengers – including elderly and young children – were forced to sit and sleep on the ground of a cold corridor at Auckland International Airport after being refused entry to a departure lounge with seats just metres away.

Those affected had just arrived on a flight from Samoa in the early hours of Sunday morning, which touched down about 2am.

More than 100 transit passengers set to fly to Australia were then ushered to another part of the airport to wait for flights later that morning, only to be told they could not go into the departure lounge until 5am – three hours later.

Elizabeth Nanai said they were left shocked and disgusted at being told they would have to wait in the corridor for three hours.

“We could see the chairs on the other side of the big windows. The lounge was right there. There were over 100 of us and only 12 seats available.

“It was 2 o’clock in the morning and we had elderly and children on the flight. Yet they expected us to sit on the ground in this cold area – we’d just arrived from the islands, we started looking for blankets and clothes to use to sit and lie down on,” Nanai said.

“There was just no customer care. It was all about the rule book – commonsense had gone out the window.”

Photos and video footage posted by passengers online show dozens of people sitting or lying down in the corridor – some on the carpeted floor and others on the white vinyl.

A man can be seen leaning against a large pillar, as a voice on the intercom can be heard in the background welcoming passengers to New Zealand: “Nau mai, haere mai.”

Many of those on the flight had travelled to Samoa for an annual church fono (conference) held by the Congregational Christian Church of Samoa, which finished this week.

It is the first time the conference has been held since the Covid pandemic.

Nanai said she and a handful of other passengers with working cell phones “hit the phones”, calling everyone from the airport, Air New Zealand and Aviation Security (AVSEC) for help.

She said a staff member at AVSEC told them they had 15 security staff at the airport, but that no one was available to come to that specific area as they were on other duties.

They were also informed seven security staff would be required to handle a group that large – yet no one arrived.
“They needed to prioritise what was important,” Nanai said.

“There were no more flights arriving at that time. They should’ve had some people available to come see us.

“It was more the oldies we were worried about. There were people in their 70s lying on the ground, using their luggage as a pillow.”

Another passenger, who was travelling with his wife and young daughter, said it felt like a blatant disregard of them as people.

“There were no vending machines whatsoever, so we couldn’t get some refreshments. It was the worst experience.”

Air New Zealand said the airline was across the “unfortunate situation” and was working to support customers. The query, however, was referred to Auckland Airport and AVSEC.

A statement from Auckland Airport said while passengers transferring between international flights do not need to go through full border clearance again, they are required to be screened by AVSEC on arrival.

“A dedicated transit screening point is operated by Aviation Security from 90 minutes prior to the first departing flight of the day through to 23:00 at night (11pm).

“There has been an arrangement in place for Aviation Security to screen passengers outside these hours, but it is dependent on its ability to redeploy staff to this area.”

Airport authorities were currently working with airlines and Aviation Security on a solution to ensure the timely screening of transit passengers regardless of their arrival time, the statement said.

AVSEC also referred the Herald’s query to the Auckland Airport.

With international borders starting to re-open around the Pacific, flights to and from the respective Pacific Island countries have been packed.

Adding to the situation is that there are currently no direct flights to and from Samoa to Australia. The other route open to travellers is via Fiji.

Nanai said she was speaking up so this did not happen again.

She said on about the sixth call to Aviation Security, she told the operator: “How would you feel if this was your mum or dad?’ [They] just said they don’t have any staff until 5 o’clock.

“I couldn’t believe it. Is this New Zealand or what? Maybe next time we’ll go via Fiji – at least it will be warmer,” she said.

ADB approves US$30 million to support safe and energy-efficient shipping in...