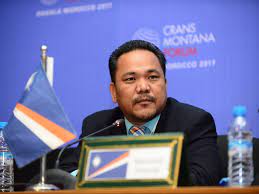 The Marshall Islands halted key negotiations with the U.S on Friday over ongoing grievances relating to nuclear testing dating back 70 years on the atolls in the heart of the Pacific.

Discussions planned for this weekend to renew the terms of the Compact of Free Association — a key international agreement between the U.S, the Marshall Islands, Micronesia and Palau — were broken off in Majuro.

The Marshalls are refusing to continue talks unless Washington addresses ongoing health, environmental and economic issues resulting from U.S testing of nuclear weapons on the idyllic atolls from 1946-58.

The Marshalls submitted a proposed settlement agreement to U.S negotiators during the second round of talks in July, but say there has been no response.

The Marshallese team renegotiating the agreement is refusing to travel to further talks in Washington.

Kenneth Kedi, speaker of the Marshalls’ parliament, said Friday that it was “not prudent to spend over US$100,000 for our delegation to travel to Washington” unless their concerns were addressed.

“We are negotiating in good faith,” he said.

“We submitted our proposal in writing, but there has been no answer or counter-proposal from the U.S.”

The State Department released a statement through the embassy in Majuro saying Joseph Yun, U.S special envoy for Compact negotiations, would meet with Marshalls President David Kabua this week in Washington “to continue to advance the discussions”.

The island nation is one of the key U.S allies in the Pacific amid ongoing tensions between Beijing and Washington.

However, their stance slows momentum on the negotiations, straining ties between the Marshall Islands and Washington on the eve of this week’s summit of Pacific Islands leaders at the White House.

U.S negotiators had hoped for a speedy conclusion to the Compact talks, as the existing 20-year funding package expires at the end of September 2023.

However, grievances stemming from the nuclear testing remain a stumbling block for the Marshall Islands.

“The cancellation of the talks indicates the seriousness of this issue for the Marshall Islands,” said the chairman of the country’s National Nuclear Commission, Alson Kelen.

“This is the best time for us to stand up for our rights.

“We live with the problem (from the nuclear tests).

“We know the big picture: bombs tested, people relocated from their islands, people exposed to nuclear fallout. We can’t change that.

“What we can do now is work on the details for the funding needed to mitigate the problems from the nuclear legacy.”

In his speech to the United Nations in New York last Wednesday, President Kabua said the Marshall Islands had a “strong partnership” with the U.S.

But he insisted “it is vital that the legacy and contemporary challenges of nuclear testing be better addressed” .