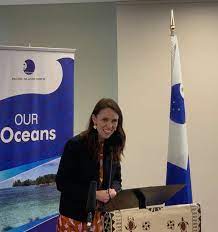 New Zealand Prime Minister Jacinda Ardern made a surprise appearance at a Pacific Islands Forum event in New York, joining Pacific leaders as they warned wealthy countries they needed to cut their emissions: “save us and you save yourselves”, was the message from one.

Pacific Islands Forum countries gathered at the Australian consulate for the global launch of the 2050 strategy for the Blue Pacific Continent, a strategy that unites the voices of Pacific Island countries behind a common goal for their region in 2050, addressing issues like economic development and security.

The strategy had its global launch in New York as a message to high emissions countries that they needed to cut emissions for pacific nations to survive.

Bainimarama told gathered leaders the message to high emissions countries was to cut emissions urgently “act now, cut emissions – save us and you save yourselves”.

“You cannot tune out what we have to say… together we are an oceanic superpower,” he said.

Prime Minister Jacinda Ardern was scheduled to attend the event, but later dropped out for scheduling reasons. She then made a surprise and unannounced appearance and was ushered straight to the lectern to give an impromptu speech.

“I could do no better than to simply echo the words of the Prime Minister of Fiji,” Ardern said.

“When it comes to the most significant security issue that our region faces, it is by far and away climate change.”

Ardern said she would not speak “on behalf of anyone – the Pacific speaks for itself”.

She appeared to endorse fears about climate change, describing it as a “clear and present threat”.

She said rising sea levels were forcing children to wade through water to go to school and raising the dead from traditional burial grounds inundated by the sea.

Australian Foreign Minister Penny Wong was in attendance, with Prime Minister Anthony Albanese absent from New York this week citing the large amount of travel he has already done since taking office earlier this year.

Wong has highlighted the Pacific in her foreign policy.

Wong has taken a less didactic approach to Pacific foreign affairs than previous Australian foreign ministers, a strategy that appears to borrow from the New Zealand Government’s “Pacific led” approach.

Wong worked the room ahead of speeches, exchanging jokes with Bainimarama about the merits of rugby league and rugby union.

She was overheard joking about Australia’s poor performance in the Bledisloe Cup, and in particular its bad record of winning at Eden Park.

One leader left out of the Pacific bonhomie was Solomon Islands Prime Minister Manasseh Sogavare, who spent much of the event on the perimeter of the room.

Sogavare has found the international spotlight directed at Solomon Islands after the country signed up to a security agreement with China – a move that was unpopular in Australia and New Zealand.

Sogavare declined to be interviewed by the Herald and was one of the first leaders to leave the event.

Diplomats from other countries, including China, which is a Pacific Islands Forum dialogue partner, were also in attendance.

How Pacific climate diplomacy is changing