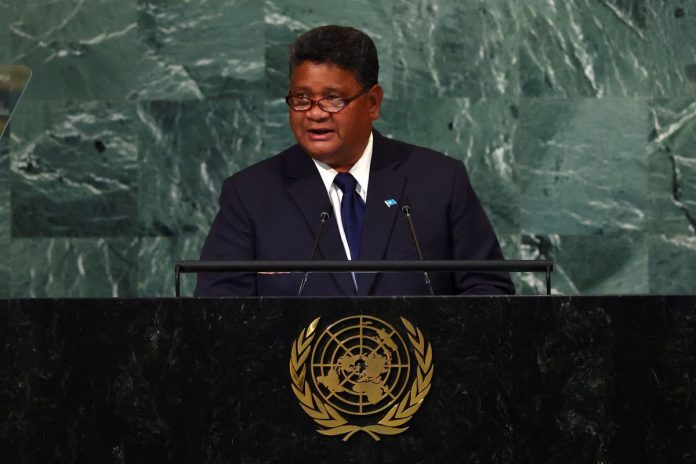 Pacific Island Palau, which is at the centre of the geostrategic struggle between the U,S and China, called on Wednesday for more US support in building infrastructure and the economy.

Palau and two other Pacific island states, the Marshall Islands and the Federated States of Micronesia (FSM), are now renegotiating agreements with the United States in the 1980s that give Washington defense responsibility and the right to military bases in exchange for economic support.

These agreements, known as “Free Association Compacts”, are expected to expire in 2024 for Palau and next year for the other two states. Experts and former US officials have warned that island nations may seek support from China if talks fail. read more

In a speech to the United Nations General Assembly (UNGA), Foreign Minister Palau Gustav Aitaro said that in a preliminary review of his country’s pact, the US administration “offered unacceptably insufficient aid.”

However, he said US. President Joe Biden has since appointed a special envoy “who we believe will ensure that his government at least meets the minimum needs of Palau so that our people can achieve a decent standard of living without having to travel.”

“It is essential for the relationship to survive as my government wants,” said Aitaro. “He hopes that the next time we turn to the General Meeting, we will be able to reach an agreement on this.”

Aitaro said Palau, with a population of just over 18,000, needs more financial and program assistance, as well as public and private investment, to grow its economy.

Palau was grateful for the help from the United States and other governments such as Taiwan and Japan, Aitaro said.

“But we need more now, just as we need the resources to fight and adapt to rising sea levels,” he said, adding that there was a particular need to move the Palau Hospital from the mainland, which is now regularly flooding, to higher ground.

Palau has seen some development since it signed the agreement with the United States, “but not enough.”

Aitaro also praised Taiwan’s recognition of Taiwan and said the United Nations should accept him into the UN system.

Aitaro’s comments came the day before U.S Secretary of State Antony Blinken will host a meeting on the sidelines of the UN General Assembly to better coordinate aid to the Pacific Islands region. read more

Next week, Biden will host a summit with Pacific Islander leaders, which, according to his head of Asian politics, Kurt Campbell, reflects “our willingness to clearly demonstrate our greater commitment to the Pacific in the future.”.

Pacific Islanders at risk of statelessness if laws not strengthened says...