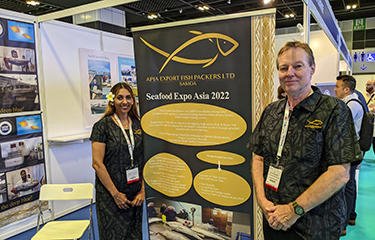 -Apia Export Fish Packers, a Samoa-based tuna fishing company that employs only local residents, is working to get back in the export game post-COVID.

Apia Export Fish Packers Co-Owner Steve Cleverly told SeafoodSource that part of that effort was rooted in attending Seafood Expo Asia – which ran from 14 – 16 September in the Suntec Singapore Convention and Exhibition Centre – for the first time.

The relatively small company, formed 26 years ago, was able to attend the show thanks to the efforts of the Pacific Islands Forum Fisheries Agency (FFA), a nonprofit organisation that assists seafood companies from countries in the South Pacific.

“It’s been quite a strategy by FFA to have us at this show, to allow us to come here, because we would never be able to afford to do it otherwise,” Cleverly said.

Apia Export Fish Packers catches tuna in Samoa’s exclusive economic zone, and in a typical year, the company produces between 500 and 800 tons of frozen tuna and 300 and 400 tons of fresh tuna.

The company has already sent tuna overseas via export to markets like the U.S, but COVID put a stop to some its ambitions, especially when it came to fresh exports, Cleverly said. But with its exports halted, Apia Export shifted to supplying Samoa’s local market.

Air freight in Samoa is highly dependent on whether or not there’s any regular passenger flights to the area, and COVID-19 restrictions made it so tourism – one of Samoa’s main sources of income and the main driver of passenger flights – dried up overnight.

“Samoa is relatively isolated compared to Fiji or Papua New Guinea, our services were severely stunted,” Cleverly said. “They always had a lot of planes, so we suffered for sure.”

“They have hundreds of these containers around the place, but no one is coming to pick them up,” Cleverly said.

Things are starting to return, he said, but now labor shortages in New Zealand and Australia are resulting in workers from Samoa leaving behind Apia Export Fish Packers to pursue opportunities abroad.

Despite the obstacles his company faces, Cleverly said attending SEA helped the company meet potential customers – and get an idea of what’s out there.

“You get so engrained in running the company, when you come to a place like this, we see another world,” Cleverly said.

Now, the company is considering whether or not to pursue Marine Stewardship Council certification and other certification programs.

“We have to look at what we have to do, and how we have to do it, and whether we’ll go down that track,” Cleverly said.

The end goal is to elevate Samoa’s position in the global seafood industry, according to Cleverly.

“It’s to put Samoa on the map, to put our country on the map,” Cleverly said.