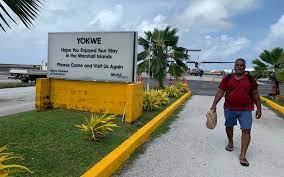 The Marshall Islands has ended over three years of a State of Health Disaster and opened its borders to normal travel as of this week.

The Marshall Islands has lifted its state of health disaster after three years, and opened its borders to normal travel.

It was put in place in mid-2019 in response to an outbreak of dengue fever, and was continuously extended when Covid spread globally.

The Micronesian nation was one of the first to close its borders when the Covid pandemic started, and remained Covid-free for more than two-and-a-half years until last month.

The Marshall Islands government’s State of Health Disaster expired on Thursday local time, and the National Disaster Committee said there was no reason to extend it.

The requirement that people people wear face masks in public places, instituted in early August in response to the spread of the Omicron variant BA.5, is expected to be lifted shortly by the National Disaster Committee.

“After over three years of a State of Health Emergency/Disaster in the Marshall Islands, thank God it is finally over,” said Health Secretary Jack Niedenthal. “I would like to say kommol tata (thank you) to everyone for the massive community-wide effort that got us through this. It is now time to move on and normalise our lives.”

Government Chief Secretary Kino Kabua confirmed lifting the mask mandate is on the agenda for the National Disaster Committee. “The current mandate was based on initial projection that we would have gone through a two-to-three month outbreak,” she said. “But that wasn’t the case.”

The Marshall Islands’ experience with Covid Omicron BA.5 was “boom and bust.” Within a week of the first cases, over 1000 cases per day were being reported in mid-August in a population estimated at 42,000. By 01 September, the number of cases was down to fewer than 10 per day in Majuro and Ebeye, and this week Majuro and Ebeye were reporting almost no new cases and only two outer islands were reporting a trickle of new cases.

“It’s all on the table,” said Niedenthal of the various Covid prevention rules now in place. “The key is, if there’s another wave, then you got to start doing those things, masking up, testing at the airport, perhaps. But not right now.”

The requirement of managed quarantine to enter the country had been in placed since mid-2020. It was lifted last week, opening the borders for the first time in two-and-a-half-years.

In 2020, when the Marshall Islands first started to allow people to come into the country, it required over 28 days of quarantine. Later it was reduced, but the strict quarantine operation managed to keep the country Covid-free until August 2022.