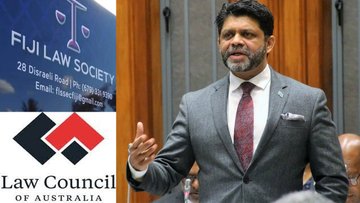 Fiji’s Attorney General, Aiyaz Sayed-Khaiyum has condemned the Fiji Law Society and the Law Council of Australia for their analysis of the Electoral (Amendment) Bill 2022.

Sayed-Khaiyum said the major objection by these two organisations is on Clause 3 of the Bill as the amendment to the Act will provide powers to the Supervisor of Elections necessary to carry out his or her functions under the Act, including the power to direct a person, by notice in writing, to furnish any relevant information or document.

Sayed-Khaiyum said the Fiji Law Society is wrong in saying the proposed amendments unnecessarily extend the powers of the SoE beyond those necessary to fulfil his powers and duty under the Electoral Act.

He said similar provisions are in the Immigration Act, the FNPF Act and the FICAC Act.

“It is already there. NFP, SODELPA, all their other people did not object to this particular provision – it’s there. Similar, verbatim – word for word – no object, but only now they are objecting to it. Why, because they read too many conspiracy book.”

Sayed-Khaiyum further questioned the Law Council of Australia’s statement where it states the use of such powers is justified only when necessary to achieve a legitimate purpose and only when accompanied by sufficient protection against their overuse or misuse.

Meanwhile, The People’s Alliance has also issued a statement supporting the views and calls made by the Fiji Law Society.

Sayed-Khaiyum said there are provisions in the Electoral Act where political parties can appeal to the Electoral Commission if they are not happy with certain decisions and can further file and appeal in the courts.