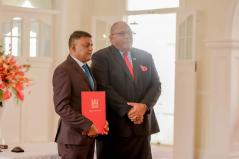 The writ for Fiji’s 2022 General Election was issued by the President Ratu Wiliame Katonivere to the Fijian Electoral Commission Monday in accordance with Section 59 of the Constitution and Section 21 of the Electoral Act.

“I command you to cause an election to be held according to law, of 55 members to sit and vote in parliament,” Ratu Wiliame read out.

“And I appoint the sixth hour past noon on the 31 October 2022 to be time and the end date before which the registration of voters for the election is to be made.

“And I hereby direct that you must receive nominations of candidates at the Fijian Elections Office situated at St Stephen’s Building at Victoria Parade, Suva by 12 noon on 14 December 2022.”

Names of the members of parliament have to be endorsed and the writ is to be returned on or before 28 December.

Supervisor of Elections, Mohammed Saneem said the Voter Registration Drive was again operational from seven this morning, but will cease at 6pm.

Saneem said to assist as many voters as possible, 63 hotspots are operational.

He said teams will be pushing out registration on the FEO’s social media platforms.

Saneem said the issuance of the writ by President Ratu Wiliame Katonivere means no more political parties will be registered after today.

The Supervisor of Elections also confirmed that nine registered political parties will contest the election.

From tomorrow (Tues 01 Nov), the Fiji Elections Office will announce the itinerary through which political parties will be nominating.

He said at least one independent candidate will be nominated this week.

Saneem said as at eight this morning the FEO has received 35 postal vote applications.

The FEO will continue to receive applications for postal voting until 23 November.

He said candidates are expected to intensify their campaigns, and therefore, political parties, candidates, and representatives must adhere to key legal requirements and restrictions.

Saneem said all actors need to be responsible for their behavior and comply with the law.

The Supervisor of Elections is also urging Fijians to be respectful of other people’s views and opinions and allow everyone to enjoy their right to equal participation in the General Election.

In another development, Saneem said only political parties will be required to delete online campaign materials during the election blackout period.

He said it will not be mandatory for media organisations to delete political party articles from their website two days before Election Day.

“For political parties, of course- they have to comply with that and we’ve made necessary training to them but for media, we will not ask you to take down materials because it’s already published.”

Saneem said from today, only accredited media organisations will be allowed to cover its press conferences and the media has been alerted a week ago to submit their applications.

He said the Fiji Police Force will provide security on Election Day.

The blackout period will be on Monday 12 December and Tuesday 13 December.