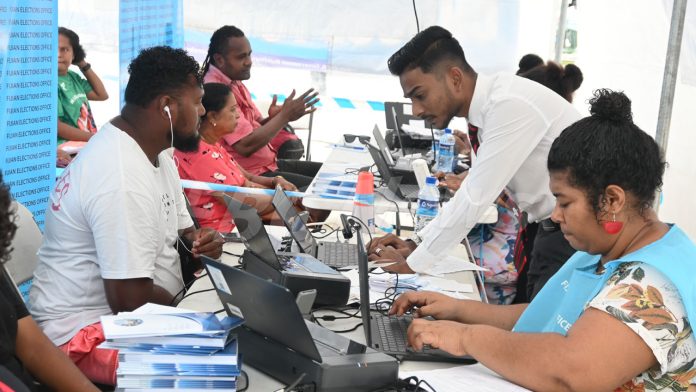 This has been confirmed by the Electoral Commission Chair, Mukesh Nand following the issuance of the writ of election at the State House in Suva today.

Nand said Fiji is now in election mode and the Commission under Section 75 of the Constitution is responsible to conduct free and fair elections as per the law governing elections in Fiji.

“The writ for an election that has been issued contains the following details: Election for 55 members of parliament, date and time on which, and the place that which nomination of candidates for the election are to be received by and date on which the poll be held for the 2022 General Election and date on or before which the writ is returnable to the President.”

He said that pre-poll and postal voting will also be available for voters who cannot attend their assigned polling station on Election Day.

Nand also stressed polling stations will open from 7:30 am to 6 pm on the 14 December

Meanwhile, Fiji’s Supervisor of Elections Mohammed Saneem has accredited the first member of the Multinational Observer Group (MOG) who is now in the country as a long-term observer of the general election.

Accredited is Snehal Sosale of the Australian Ministry of Foreign Affairs and Trade (DFAT).

The coordinator of the MOG is also expected in the country shortly. Australia, India, and Indonesia co-lead the MOG for the General Election.