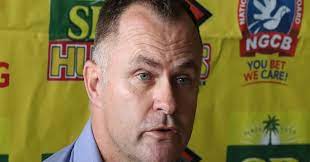 “The Hunters have faced unprecedented challenges over the last few seasons,” he said.

“But under Church’s direction, the club and players have always demonstrated great resilience.”

The Tigers announced Church’s appointment Monday ahead of their finals campaign this weekend.

The 45-year-old has been the head coach of the Hunters for the past three seasons.

Church, a former Origin Greats Colts and Mal Meninga Cup coach with the Tigers, will return to the club which kick-started his coaching career.

After retiring from playing, he began his coaching career with the Tigers, coaching the club’s junior representative sides from 2013-2015, before taking a role with the Melbourne Storm National Youth Competition squad in 2016-2017.

Church was the assistant coach of the Sunshine Coast Falcons in 2019, before taking up the Hunters role in 2020.

“I am humbled and honoured to be appointed to coach the Brisbane Tigers for the next two seasons,” he said.

“I’d like to thank the club’s management for their faith in me.

“Having played and coached with the club previously, I feel like I’m coming home.

“I look forward to adding to the rich history of this great club whilst also being able to be the coach to usher in the upgraded facilities.”

Tigers chief executive Brian Torpy said he was excited about the appointment.

“On behalf of the club, I am thrilled to welcome Matt to the Tigers as the head coach,” he said.

“Matt is a former player and has come through our junior representative system, including Colts, so he has a very good understanding of the club.

“Matt’s values align with those of the club, and his vision for the club, the playing group, and our fans, made him a standout applicant.”

Meanwhile, the Hunters will advertise the role in the coming weeks.