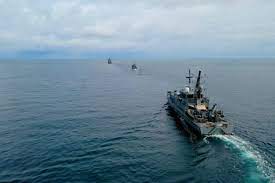 It’s time for Pacific law enforcement agencies to work together, rather than trying to combat the region’s growing drug crisis in isolation

Law enforcement agencies in the Pacific can no longer afford to work in isolation. Transnational organised criminal syndicates have long used the Pacific in the past as a transit point for their illicit activities, including drug trafficking. More recently, however, these organisations have been modifying their ‘modus operandi’, by trafficking to Pacific states rather than just through them.

The growing presence of illicit drugs in the Pacific is a major human security concern that’s impacting our health services and communities. This has been driven, in part, by the deportation of felons – often with links to organised crime – to the region from the United States, Australia and New Zealand. This has led to an influx in the supply of illicit drugs and an increase in their consumption in the Pacific.

Already overstretched law enforcement agencies in Pacific Island countries are struggling to control the region’s porous and vast maritime boundaries. Working in isolation, these agencies lack the capacity to monitor and exchange information on foreign or local vessels that visit outer islands or remote coastlines. The siloing and bureaucratic red tape of law enforcement agencies only adds to existing vulnerabilities.

In many ways, technological advancements have made this task more difficult in an increasingly lucrative Pacific narcotics market. Whilst the use of yachts and inter-island shipping services is a well-known way these syndicates smuggle drugs, criminal cartels are now also incorporating private drone submarines which can literally operate under the nose of law enforcement. In response to these new challenges, a more concerted and collaborative effort is necessary to target these criminal networks.

On a human level, the influx illicit drugs into Pacific Island countries has seen an increase in the number of drug addiction cases and, with those, have come health security concerns and social problems.

The region’s national health systems are unprepared to cope with the health challenges accompanying the rise of addiction cases, and lack adequate rehabilitative facilities.

Sadly, a spillover effect is that addiction has pushed some towards criminal activity, and Pacific states aren’t equipped to cope.

In response to this growing challenge, every Pacific nation needs to fully ratify and implement the 2018 Boe Declaration on Regional Security, which calls for the establishment and strengthening of national security systems.

One major outcome of this implementation needs to be the strengthening of inter-agency law enforcement via real time intelligence sharing.

Furthermore, the region as a whole need to coordinate their policies in order to curb criminal cartels, who unlike governments are not limited to only one country.

The recently established Pacific Fusion Centre will be central in this regard, as it seeks to provide the region with greater maritime domain awareness by collating information from Pacific security and fisheries agencies.

Governments also need to look local, and work more closely with non-state actors to foster a ‘whole of country’ approach towards countering these cartels and their illicit operations. After all, it is Pacific people and communities themselves that are on the frontlines of the emerging drug crisis, and as such their inclusion is vital to any possible success.

As such, governments must incorporate actors such as village representatives or headmen, district as well as divisional security committees, and civil society groups and religious organisations into their national policies.

Island states have spent too long dwelling in isolation, separated by artificial boundaries that divide us, not only physically but conceptually. The only way to ensure a safe and secure Pacific today and for future generations is to strengthen our national security systems and, most of all, collaborate with each other.