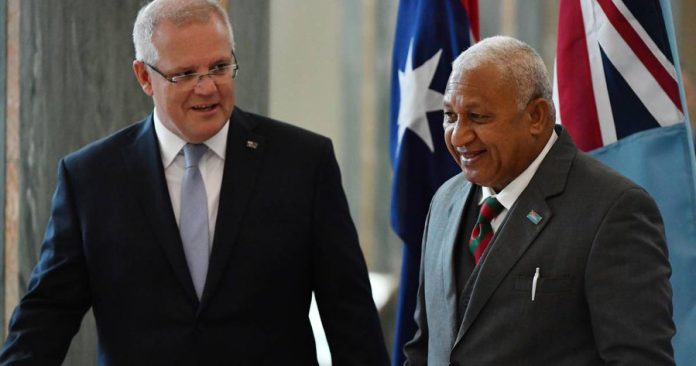 The Solomon Islands’ security pact with China is yet another worrying marker of Australia rapidly losing influence in the Pacific.

Unless it demonstrates clear strategic leadership, Australia can expect to see other pieces of its regional security architecture crumble away.

The Provincial Premier in the Solomon Islands, Watson Qoloni, didn’t mince his words when he refers to the urgent need for funds to finance relocations in Taro, the first confirmed Pacific community that must move due to the climate threat. He said: “It doesn’t matter where the money comes from. Whether it comes from God or Satan, we will take it.”

The desperation is real. Many small island nations in the Pacific are facing an existential threat – sea level rise due to climate change. This threat is clearly visible today.

This situation is a key strategic concern for Australia as our regional security depends on a tight relationship with our close neighbours. Many international players are likely to become engaged in supporting these small nations as they battle for their very existence. Australia should be leading this effort to ensure regional stability and security.

For decades Australia has spent billions of dollars on aid and development in the Pacific. The Pacific island nations have always been a high priority for assistance, but investment has been very bumpy.

In the face of Chinese activity in the region the Australian government announced the Pacific Step Up in 2016. This announcement was routinely referenced as helping our “Pacific family”. The Step Up included increased funding to assist Pacific nations tackle climate change challenges.

Unfortunately, Australia is not demonstrating that it is taking its own climate change challenges seriously. We have not produced clear transition plans to ensure that we reach net zero emissions by 2050. The latest federal budget shows funding for climate change initiatives reducing rather than increasing. Exports of coal and gas are set to increase rather than stop. This contradiction causes our support to be seen as disingenuous even though significant amounts of money are being sent into the Pacific to combat the effects of climate change.

We have lost decades of opportunity for meaningful, planned actions to reduce carbon emissions and transform ourselves. We have little credibility when we try to use our middle power status to assist developing nations in our region face the impacts of climate change and the resultant sea level rise.

The recently released draft of the 6th Intergovernmental Panel on Climate Change (IPCC) makes chilling but scientific deductions on what the world is facing from climate change. In relation to the small island nations like those in the Pacific, the report concludes: “Climate change is contributing to humanitarian crises where climate hazards interact with high vulnerability (high confidence). Climate and weather extremes are increasingly driving displacement in all regions (high confidence), with Small Island States disproportionately affected (high confidence).”

Global temperatures and sea-level rise can be stabilised if urgent action is taken to reduce carbon emissions. This should be a critical element of our defence strategy. Australia needs a true family in the Pacific. Focusing on funding mitigation measures in Pacific nations, while dramatically slashing our own emissions, would restore our credibility in our region and provide much-needed security for all.

Our Pacific neighbours have been raising Australia’s contradictory position for years now. It should come as no surprise that these near neighbours are looking elsewhere for solutions to their problems. Australia’s national strategies are misaligned. Numerous Pacific island nations are literally disappearing under the sea. As sea levels rise villages are being washed away and populations forced to relocate. This is creating tensions and competition over the limited land available for the relocation of communities.

Concurrently, Australia is trying to increase the amount of fossil fuels we export. Nations that burn these fossil fuels feed the climate crisis that is now engulfing our friends and neighbours. Our security strategy must be aligned with all other national strategies.

Concerns about the impacts of climate change on Australia’s regional security generally focus on how many “climate refugees” are likely to seek new homes here in Australia as land is submerged by the ocean. Australia’s extremely tough immigration policies will be tested to the limit as members of our Pacific family seek new lives here. It is likely that the numbers of refugees could be in the tens of thousands. These people do not want to be forced to relocate to Australia or anywhere else. They want to continue to lead their lives where they are now. Large-scale population relocations would create serious security challenges for Australia.

If China can build islands for its military in the South China Sea, we can “build islands” for our family in the Pacific. If we don’t act, China will. Pacific nations are the victims of unabated carbon emissions from developed countries. They will never see Australia as a part of their family unless we change and help them.

In the interim they will accept funding from almost any donor even if the donors are major greenhouse gas emitters and are causing the very threat they are trying to fight. They do not have to become climate refugees.

Australia must change quickly or face very serious threats to our security. We can only be a strategic leader in the Pacific family if we set an example in tackling the drivers of climate change by urgently curing our addiction to extracting fossil fuels.