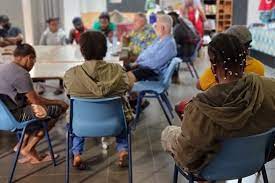 A group of Pacific workers who breached their visa conditions are fighting to get them back, although advocates say it should never have reached this point.

The 24 workers in Bundaberg “absconded” from the Pacific Australian Labour Mobility (PALM) scheme by getting jobs with a non-registered employer when work on the farm they were at dried up.

A spokesman for the Department of Employment and Workplace Relations (DEWR) said officials had met with the employees to discuss their individual cases, but solicitor Dana Levitt said they should have helped sooner.

She said the workers were brought to Australia by an approved employer but there were issues with pay and conditions.

“These workers were faced with overheads that they couldn’t meet because they weren’t getting sufficient work,” Levitt said.

“Unable to make ends meet, these workers were very open and vulnerable to inducement from other employers who were not approved employers in the scheme.

“These workers went with that non-approved employer, fell foul of the programme and their visa conditions, and have been trying to navigate their way back into the PALM scheme ever since.”

The PALM scheme allows Australian businesses to hire workers from nine Pacific Island countries and Timor-Leste for seasonal work or longer engagements of up to four years, under certain circumstances.

Approved employers must ensure the workers are well supported, and provide sufficient hours of work, a minimum standard of accommodation and the same workplace rights as Australian workers receive.

Last month, DEWR officials met with the workers, and they are now working with the Department of Home Affairs to re-engage those that are still eligible.

“These are matters the department takes seriously,” a spokesman said.

It is a condition of the visa that workers continue to be employed by their sponsor or another approved in the scheme, and not change employers unless approved by the federal government.

PALM scheme employees can access country liaison officers and a support phone line if they have issues with their employment, but Ms Levitt said there was reluctance to report issues to the same authority that they relied on for visas.

“There’s a huge deterrent effect for workers to actually seek help through the right channels,” she said.

“There needs to be … an independent body that workers can approach when they have issues related to their inability to make ends meet, or their desire to move to another approved employer.”

Traditionally, farmers have relied on seasonal backpacker labour for planting and harvest work, but since the pandemic, working holiday-makers are yet to return in the same numbers.

Bundaberg Fruit and Vegetable Growers chief executive Bree Grima said that made it even more critical the Pacific workers were supported.

“We’ve had some brilliant numbers come into Queensland and into regional areas, a lot more than we’ve had before.

She supported calls for independent and confidential advice, but said there was already a lot of support and protection built into the scheme.

“There’s a lot of work and time and effort that goes into becoming an approved employer, and there should be,” she said.

“It is a difficult process to go through but I do support that it does do a lot of background checks and ticks a lot of boxes.

“These workers, they are highly skilled, they’re putting a lot into the community, and we need to make sure that we’re looking after them in every aspect,” she said.