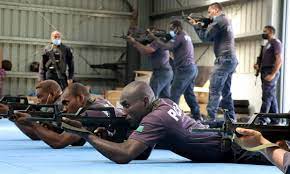 Chinese police will be invited to Solomon Islands to provide training in management and leadership to senior officers, under the new security deal signed between the two countries.

Michael Aluvolomo, the transnational crime unit inspector for the Royal Solomon Islands police force, also did not rule out having Chinese police officers embedded within the force, saying it was up to the government to determine whether that was appropriate.

“China is new to us. There are plans with our commissioner on how we can strengthen our police activity. Now, they are very much focused on our capacity building in terms of our management and leadership,” said Aluvolomo, who was speaking to the Guardian on the sidelines of the Pacific regional law enforcement conference in Fiji.

When asked whether there would be Chinese law enforcement officers embedded in the Royal Solomon Islands police, Aluvolomo said this was yet to be confirmed but insisted Solomon Islanders had nothing to fear.

Last month, in his first interview since signing the controversial security deal with China, Solomon Islands prime minister Manasseh Sogavare told the Guardian that there would be no Chinese military base in his country as it would make Solomon Islands an “enemy” and “put our country and our people as targets for potential military strikes”.

Sogavare said that while Australia remains the “security partner of choice” for Solomon Islands, he would call on China to send security personnel to the country if there was a “gap” that Australia could not meet.

Aluvolomo said that Solomon Islanders with concerns about China’s presence in the country should communicate that with the government.

“The public should work along with us and provide us with much information so that we can build on that and come in to create inclusive intelligence information.”

The Pacific regional law enforcement conference, currently under way in Nadi, is organised by the Australian National University’s Australia Pacific Security College and is an attempt to create networks to help Pacific law enforcement deal with drug trafficking and other transnational crimes, which present an increasing problem for Pacific countries.

While there is existing regional security architecture to combat transnational crime, including through the Pacific Island Chiefs of Police, which is made up of 21 members including Australia and New Zealand, there are concerns that China’s increased focus on the Pacific could disrupt or undermine these security arrangements.

In May, China presented a sweeping economic and security deal to 10 Pacific countries that would have seen increased ties between them, including in the area of policing.

China proposed to hold “intermediate and high-level police training” for Pacific island countries and as a matter of urgency to “hold the first China-Pacific islands countries ministerial dialogue on law enforcement capacity and police cooperation”, as well as helping to construct laboratories for fingerprint testing, forensic autopsy, drugs, electronic and digital forensics.

Ewen McDonald, the head of the Pacific Office in the Australian Department of Foreign Affairs and Trade, told the security conference on Monday that increased geopolitical tensions in the region represented a “strategic challenge” for law enforcement.

“Increasing external interest in the Pacific will bring benefits but also challenges to our hard-earned interoperability, our shared doctrine and our Pacific way of conducting law enforcement operations,” he said.

“At no time has a strong, unified [Pacific Islands] Forum been more important in addressing the threats and challenges we face together.”.