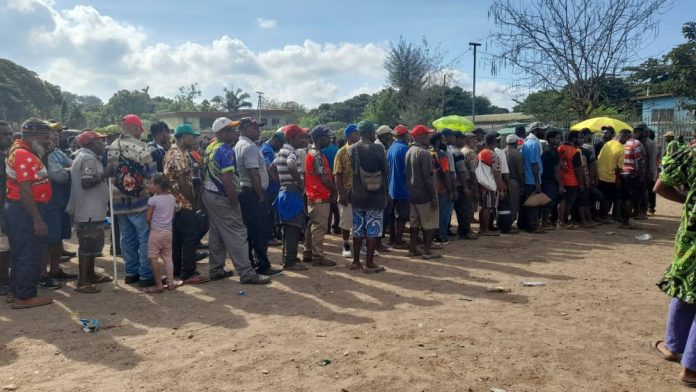 Thousands of voters have missed out in the polls igniting angry leaders to call on Papua New Guinea Prime Minister James Marape and Electoral Commissioner Simon Sinai to explain the chaos.

As today is the last day of polling, thousands more are hoping their names will be on the Common Roll and that they will not miss out in exercising their rights to participate in a free and fair election.

Sinai acknowledged last week that polling this week is being conducted using the 2017 Common Roll.

Strangely, many people who voted under that roll in 2017, have reported their names mysteriously missing this time around.

He said that missing names have been a common feature at every election and that “there is no such thing as a perfect roll,”

In a statement last night, PM Marape admitted the Common Roll was inadequate and apologised to all the people of Papua New Guinea who did not have their names in the Common Roll in the 2022 General Election.’

He said: “We’ve advised the Electoral Commission that our people, so long as they are adults and have voted in 2017 or earlier, should be allowed their Section 50 right to vote for the candidate of their choice.

No-one should be turned away at the polls.

“The Common Roll was not adequately prepared, as I told the media on Monday, in my own village after I voted.

There was a drop of about 800 names from the Common Roll in my village.”
Complaints have been received throughout the country where voting started on Monday by voters including several leaders.

Irate leaders in the likes of Sir Julius, Bird, candidates and supporters throughout the country have aired their frustrations over the electoral roll mishap.

Sir Julius angry that plenty of his people have not voted as their names were not on the roll, called on the government to immediately hold Electoral Commissioner Simon Sinai accountable for this discrepancies.

He said Sinai should be held accountable for all the voters in New Ireland including the New Guinea Islands region, the Mamose and Southern who have not voted.

“It is tough when you don’t have resources to move around people to vote and it is frustrating to have people not find their names on the roll to vote,” he said.

Bird said that the provinces should now apply to the Supreme Court to remove the functions of Electoral roll updates from the Electoral Commission and take it to the provinces.

He said this following report of voters in some districts of East Sepik Province being denied their democratic right to cast votes due to a shortage of ballot papers and those without names.

He said the new government must consider creating a Special Parliamentary Committee on Elections, to oversee some roles of the Electoral Commission.

Everywhere else in the country, every second person complained of no names on the roll. Over 500 residents in Western Province were denied voting.

In Kiunga, more than 100 residents in Kiunga urban LLG in North Fly have not cast their votes

In Gulf, villagers in East Kerema reported that no electoral officials turned up to conduct elections at the polling posts at Lese, Keaharo, Miaru and at Tawo on the highway.

Polling in a ward in East New Britain Province was called off following tensions over missing voter names on the electoral roll.

Over 200 eligible voters at the Vunamurmur Ward in the Raluana Local Level Government in the Kokopo electorate were turned away, after their names were not on the electoral roll.

Polling in Central Province on Monday did not start on a good note because some eligible voters in the Rigo District Ward 16 were turned away by polling officers because their names were not on the updated electoral roll.

People at Saroakeina village in the Ward 16 area of the Rigo Central LLG including Saroakeina, Poligolo and Porigere and other wards in parts of the province were turned away.

In Bougainville, a village in Haku, more than 120 voters were turned away because they did not have their names on the roll.

Meanwhile, Transparency International PNG has called for accountability of decisions in this national election instead of the status quo blame-games between election stakeholders.

The watchdog along with the Catholic Church, the Body of Churches and the businesses houses are all calling on the Electoral Commission, the national government, candidates, scurtineers and voters to take ownership of the elections.

Chairman of TIPNG Peter Aitsi said all stakeholders needed to be working together in order to deliver the elections on time.

“Everybody seems to be pointing fingers, shifting the buck and passing the blame,” he said.

“What we want to call on is that the Electoral Commissioner, the candidates, the supporters, the various agencies of government that are tasked to deliver the elections and we as civil society must take accountability for this election.

“We do not have the luxury of time.”

Aitsi also called on candidates and scrutineers to note that while they have a right to air their grievances they must not interfere with the process.

“We remind all candidates and their supporters not to abuse their rights as candidates to try and stall the delivery of elections as any further delay will cause our nation to breach the return of writs deadline as required by the Constitution.

It is incumbent on all candidates to demonstrate leadership at this time by upholding the Constitution and ensuring that elections are delivered on time,” said Aitsi.

Noting that 29 July was the date set for the return of writs, the country has about four more weeks to complete polling and counting across all 118 electorates and if not, it will be a constitutional crisis.

This year’s Pacific elections marginalise and isolate too many