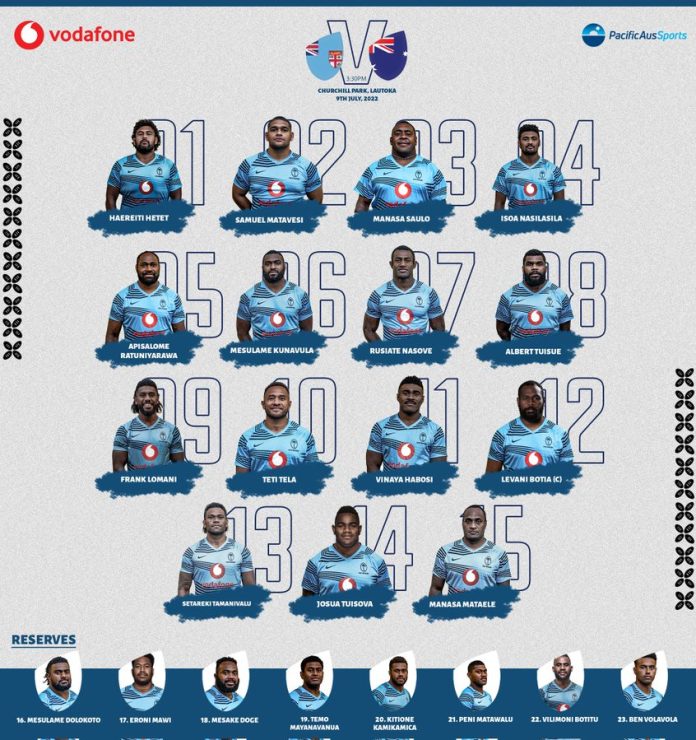 Flying Fijians Head Coach Vern Cotter has reshuffled 11 players in his 23-member squad for their World Rugby Pacific Nations Cup match number two against Australia A at Churchill Park in Lautoka on Saturday.

Cotter said “We are creating tough decisions within the group so there have been some changes for this week, a couple through injury and fatigue and some just through giving players’ opportunities.”

In-form hooker Sam Matavesi returns to the starting lineup and will guide the front row which consists of Loosehead Prop Haereiti Hetet and Manasa Saulo on the Tighthead.

Experienced lock Apisalome Ratuniyarawa also makes it into the starting 15 after coming off the bench against Tonga in the second half. Ratuniyarawa will marshal the lineout together with young Isoa Nasilasila who earns his second straight start.

Cotter has maintained the halves combination of Frank Lomani and Teti Tela. Levani Botia returns to the captaincy role and will add more firepower in the midfield together with Setareki Tamanivalu who earns his first start after showcasing some impressive footy against Tonga in the second spell.

Fans could expect more power and speed on the wings as the “Bus” Josua Tuisova starts at the right wing while Vinaya Habosi will be on the left. Manasa Mataele replaces Setareki Tuicuvu at fullback.

Cotter has once again opted to have experienced players on the bench. Mesulame Dolokoto, Mesake Doge, Temo Mayanavanua, Vilimoni Botitu and Ben Volavola have all been named on the bench after missing the match against Tonga.

Cotter said they are looking at taking their performance to a level up in Lautoka this weekend.

“One of the key things we looking at this week is making sure we strive to improve but I’m satisfied with the game and it’s the winning mindset which our players have developed,” he said.

He added that Australia A will come with all guns blazing after narrowly losing to Samoa last weekend.

“We saw against Samoa, they were a well organized and well-practiced team. They will try and get the ball to the outside and will try and create space so we need to be very smart in defense and work together.

We will do man-on-man marking plus we need to be strong and aggressive in our defense but well organized at the same time” said Cotter.