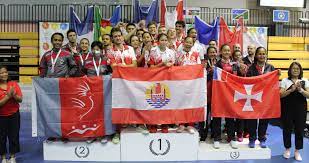 The last rivalry showdown was at the Samoa 2019 Pacific Games where New Caledonia’s narrow 3-2 victory resulted in a three-way tie and a subsequent silver medal for New Caledonia and bronze for Tahiti. This year, both teams have been on the quest for gold, which led up to this final round robin match.

Spearheaded by the highest ranked player of the tournament, Rémi Rossi, was first on court with May Gaymann in the mixed doubles. The Tahitians seemed to get off to a bit of a shaky start. However, they managed to turn it around and their riled opponents lost grip of the lead to set up the first point for Tahiti.

Pacific-Games veteran Johanna Kou had a chance to level the playing field. However, a stunning performance by Tahiti’s 16-year-old Jenica Lesourd assisted Tahiti’s campaign to take a surprisingly early 2-0 lead. Jenica demonstrated a high level of athleticism to maintain her form over two games, complimented by a number of unforced errors on Johannas behalf to win 21-19 21-14.

“I am happy with my performance, I tried to make sure I kept control of the net. My main goal is to keep progressing in badminton,” says Jenica.

Carl N’Guela had the weight of the match on his shoulders heading into the men’s singles. While his opponent Quentin Bernaix had the opportunity to bring in the golden moment as the men’s singles became the “make it or break it” situation.

Both players maintained their composure throughout the three-game-thriller, despite a fiery game of crosscourt exchanges. Ultimately, it was the Tahitian who came out on top 18-21 21-19 21-18 and was instantly met on court by an onslaught of Tahitian teammates to celebrate their guaranteed gold.

The Tahitian’s capitalised on the opportunity and dominated into afternoon as the following women’s and men’s doubles cemented an impressive 5-0 victory over the top seeds.

“It’s a very special moment to bring the gold medal in for Tahiti. The whole team is very happy with the results,” says Quentin Bernaix.

The team from Wallis and Futuna won a historic bronze medal this morning, earning their first badminton-related medal at a Pacific Games. Their team benefits from a mixture of experience as a handful of players previously benefitted from competitive experience in French local leagues.

The team powered through this morning’s match, seeing past the Solomon Islands 5-0 which leaves them in sixth position.

Wallis and Futuna’s presence has certainly been felt this week and there is an exciting future ahead for Badminton Oceania’s newest member association — a fantastic legacy for the team to take home in a nation where grassroots badminton is only just getting started.

“I am very proud of our team for winning our nation’s first badminton medal. We didn’t know what our level would be like against the Pacific so it has been enlightening. I thank the team for the effort they have made and the cohesion that has been present from beginning to end,” says Caroline Brial, president of Wallis and Futuna Badminton Association.

“I hope that this will inspire young people to pick up a racket as Shuttle Time picks up pace in Wallis and Futuna,” continued Caroline

On Wednesday morning, the home took on neighboring island Guam in another heated contest. In preparation for this week’s competition, the two associations enjoyed invitational tournaments and exhibition matches over the last few months — all boiling down to this moment.

The Northern Marianas took an early win in the mixed doubles, before the competition heated up for across the singles and doubles matches. The 5-0 victory of the Northern Marianas was not reflective on the close score lines between the two teams, with most matches simmering down to the final points.

As a result, the Northern Marianas complete their Mixed Team campaign with a 4th place finish — one higher than their 5th place finish in Samoa 2019. Their result against Wallis and Futuna Tuesday, which they narrowly lost out 3-2, was ultimately the deciding factor for the bronze medal.

Guam finished in 5th place, ahead of the Solomon Islands.