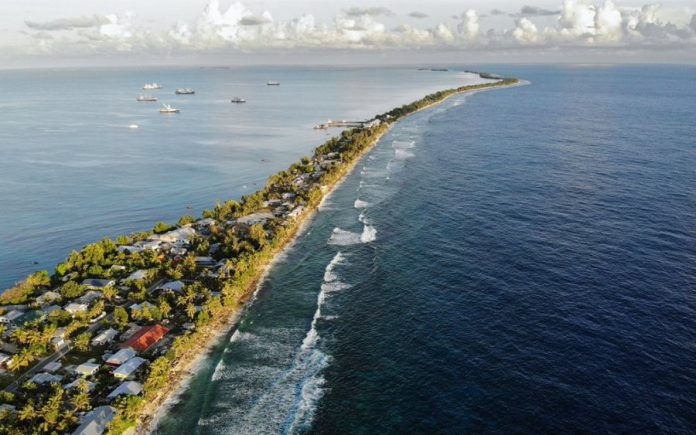 The Pacific nation of Tuvalu has launched a longshot bid to head the Commonwealth and put climate action firmly on the world’s agenda – and it wants Australia’s backing.

Tuvalu will put forward its candidate to be the next Commonwealth secretary-general at CHOGM in Rwanda on 24 June .

CHOGM is the meeting of Commonwealth heads of government, who will also vote on the next leader. Deputy PM Richard Marles will represent Australia.

Off the back of Penny Wong’s whirlwind tour of the Pacific, it’s also an opportunity for the new Labor government to make good on some of its election pledges on the climate and diplomatic fronts.

“It would go a long way if Australia was to support a Pacific candidate for the secretary-general position,” Tuvalu’s Foreign Minister, Simon Kofe, told The New Daily.

“It would really send a very strong message to the Pacific that this government is willing to work with us.”

Tuvalu is one of the most vulnerable countries to rising sea levels and certain areas are already routinely submerged by king tides.

Some outsiders have called for the population to be relocated, but Tuvaluans remain determined to protect their home.

Their candidate to lead the Commonwealth is former governor-general Sir Iakoba Taeia Italeli, an ex-police officer who worked his way up to the highest ranks of government.

He said his advocacy would serve to benefit all Commonwealth countries, be they low-lying Caribbean islands or larger countries in Africa or Asia experiencing severe weather events.

“I think national interest often gets in the way,” he added.

Sir Italeli believes now is a unique chance to push for the first-ever leader of the Commonwealth from the Pacific Islands.

The election of the Commonwealth’s secretary-general usually follows a regional rotation where every continent gets a turn in charge.

It’s currently the Caribbean’s turn. Dominican-born British politician Baroness Patricia Scotland has held the post since 2016 and was due for re-election in 2020, but the pandemic postponed CHOGM for two years and thus extended her initial term.

Australia, the UK and Canada voiced disapproval over Lady Scotland’s handling of the office and are looking to oust her before the next full term starts in 2024.

In 2020, for example, Australia cut $800,000 in funding and withheld a further $500,000 from the organisation in protest over an alleged cronyism scandal that centred around the Baroness.

The Caribbean countries are now divided in their support between Lady Scotland and her main rival, Jamaican foreign minister Kamina Johnson Smith.

The Jamaican contender has also received approval from Singapore, the Maldives, and India, along with a very public endorsement from British Prime Minister Boris Johnson.

After the Caribbean’s turn in office, the rotation is due to move to Africa. But when Kenya’s then-defence minister Dr Monica Juma dropped out of the running last year, Tuvalu saw an opportunity.

Sir Italeli bills himself as a consensus-building candidate who can overcome the regional squabbling and resolve the current scandals.

He claims to count the support of several Pacific nations as well as from within the African bloc.

“And the understanding is that it is Africa’s turn after the incumbent finishes, so we are actually putting in our candidate for the interim,” Mr Kofe added.

The Morrison government in Australia had also backed the Kenyan candidate – as per convention – but officials have remained coy since Dr Juma withdrew.

It’s expected an African candidate will once again head the Commonwealth in 2024. The Tuvaluans believe they can achieve a lot before then.

“What I really want is to have a Commonwealth group whereby we can advocate on all kinds of problems that affect member states,” Sir Italeli said.

“Number one is climate change.”

In the best-case scenario based on the pledges made at COP26, the world is on track for a 2.4-degree temperature increase.

However, scientists say temperatures must stay below a 1.5-degree increase in order to prevent the dangerous impacts of climate change.

“And so for us in Tuvalu, that means that we could disappear in the next 50 to 100 years,” Kofe said.

He has something even bigger planned for COP27.

“Obviously, I can’t reveal details of what we’re going to do this year,” Kofe said, chuckling.

“We’ll keep it as a surprise.”

In one of her first acts as foreign minister, Penny Wong embarked on a diplomatic blitz of Fiji, Tonga and Samoa to reset Australia’s delicate relationship with the Pacific.

The Department of Foreign Affairs and Trade did not respond to repeated requests for comment regarding CHOGM in time for publication.

But Australia had already made clear that it wanted a new Commonwealth secretary-general to replace Lady Scotland.

Kofe believes there’s an “unspoken rule” that countries like Australia should support their neighbours for these kinds of positions.

“We haven’t yet received anything official from the new government, where the support lies,” he said.

“But we’re hoping as a Pacific family that you’d support the candidate from our part of the world.”

After an election that saw Australians rebuke the Morrison government’s climate inaction, Sir Italeli also believes he and Albanese are now “on the same wavelength”.

He added: “Now that the Kenyan candidate has already pulled out, I think that the new administration [in Australia] will look at this in a much more Pacific way of supporting an islander to the position.”.