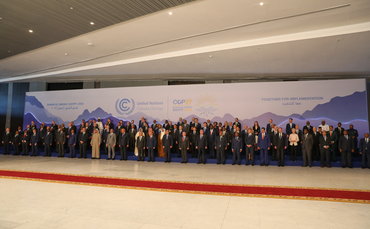 Loss and damage caused by the climate crisis can no longer be swept under the rug. The issue, including the call for the establishment of a Loss and Damage Finance Facility, should be regarded by world leaders as a “moral imperative.”

The point was raised by the United Nations Secretary General, Antonio Guterres, during the opening of the High-Level Session of the 27th United Nations Framework Convention on Climate Change Conference of the Parties (UNFCCC COP) at Sharm El-Sheikh, Egypt. The call follows the decision to include the discussion on loss and damage finance on the COP Agenda for the first time on Sunday.

Referred to as the Sharm El-Sheikh Climate Implementation Summit, Pacific leaders have this week travelled thousands of miles to Egypt to join world leaders to raise ambition to fight the climate crisis. Despite the Pacific’s negligible contribution to greenhouse gas emissions, Pacific nations are at the forefront of climate change impact.

Loss and damage, which refers to the consequences of climate change that people have not been able to cope with or adapt to, is among the Pacific’s thematic priorities for the conference. Other priorities include Adaptation, Mitigation and Ambition, Article 6, Finance, Oceans, Global Stocktake, Capacity Building and Technology, Gender, and Transparency.

Speaking during the opening of the High-Level Session, a passionate Guterres said the hard truth cannot be ignored and called for a historic Climate Solidarity Pact between developed and emerging economies.

“Humanity has a choice: cooperate or perish. It is either a Climate Solidarity Pact – or a Collective Suicide Pact,” he said.

On the issue of loss and damage, he said the world must acknowledge the reality that there is no adapting to a growing number of catastrophic events causing enormous suffering around the world.
“The deadly impacts of climate change are here and now. Loss and damage can no longer be swept under the rug. It is a moral imperative. It is a fundamental question of international solidarity — and climate justice,” he said. “Those who contributed least to the climate crisis are reaping the whirlwind sown by others. Many are blindsided by impacts for which they had no warning or means of preparation.”

World leaders at COP27 were urged to agree on a clear, time-bound roadmap reflective of the scale and urgency of the challenge.

“This roadmap must deliver effective institutional arrangements for financing. Getting concrete results on loss and damage is a litmus test of the commitment of the governments to the success of COP27.”

He added: “This UN Climate Conference is a reminder that the answer is in our hands. And the clock is ticking. We are in the fight of our lives. And we are losing. Greenhouse gas emissions keep growing. Global temperatures keep rising. And our planet is fast approaching tipping points that will make climate chaos irreversible. We are on a highway to climate hell with our foot still on the accelerator.”

President of the Arab Republic of Egypt, Abdel Fattah El-Sisi, agreed saying the 30th anniversary of the adoption of the United Nations Framework Convention on Climate Change, has allowed the world enough time to better understand the science behind climate change, better assess its impacts, and better develop tools to address its causes and consequences.

“In 2015, the world came together and showed the will to make the necessary compromises which led to the successful adoption of the Paris Agreement. Today and in light of the unmistakable messages in the recent IPCC reports, and following COP26 in Glasgow, we are once again called upon to act rapidly if we are to really meet the 1.5-degree goal, build our resilience, and enhance our capacity to adapt. I deeply believe that COP27 is an opportunity to showcase unity against an existential threat that we can only overcome through concerted action and effective implementation.”

“We have a credibility problem all of us: We’re talking and we’re starting to act, but we’re not doing enough,” Gore said. “We must see the so-called ‘dash for gas’ for what it really is: a dash down a bridge to nowhere, leaving the countries of the world facing climate chaos and billions in stranded assets, especially here in Africa.”

The official opening of the High-Level session set the tone for statements to be delivered by Heads of State and world leaders attending the conference. The President of Kiribati, Taneti Maamau, is scheduled to be the first speaker from the Pacific countries. Other Pacific leaders to follow on Monday include the King of Tonga, King Tupou VI and the President of Palau, Surangel Samuel Whipps. Vanuatu, Tuvalu and the Cook Islands are scheduled for Tuesday. Other Pacific leaders are scheduled to speak next Monday and Tuesday.

The United Arab Emirates will host COP28 and during the high-level session, UAE President Sheikh Mohammed bin Zayed al-Nahya addressed the conference saying next year is critical to finalise agreements made last year in Britain and at this year in Sharm El-Sheikh.

It is being attended by Pacific leaders and their delegations, who are advocating for their survival. The Secretariat of the Pacific Regional Environment Programme (SPREP) is lead of the One CROP working together to provide support to Pacific Islands.