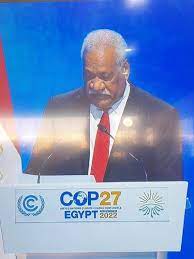 Vanuatu’s President has strongly appealed to world leaders at the climate summit in Egypt to vote in favor for Vanuatu’s climate justice resolution that will be tabled at the United Nations General Assembly (UNGA) soon.

The UNGA will be asked to vote on the resolution seeking the world’s highest court, International Court of Justice (ICJ) to deliver an advisory opinion on climate change obligations under international law in a few weeks.

President Nikenike Vurobaravu told over 100 leaders at the summit that the time has come for ICJ to consider climate change. He said young people are demanding climate justice and their fundamental human rights of the younger generation must be protected.

“We can no longer measure climate success only in tons of carbon, or degrees of Celsius, but in the lives saved and human rights maintained. The ICJ will help to clarify our work here at the United Nations Framework Convention on Climate Change (UNFCCC), to help us put human and environmental rights at the center of climate change decision-making,” he said.

“Vanuatu is of the view that states already have, under international law, existing legal obligations to protect the rights of present and future generations from adverse impacts of climate change. Vanuatu is also of the view that states have, under numerous exiting treaties, legal obligations to prevent significant harm to the climate system and other parts of the environment.

“The UNFCCC was not intended to operate in isolation, nor does it absolve any party of their existing legal obligations under the other treaties they have ratified.

“To meet the goals of the Paris Agreement, and save the UNFCCC, states will benefit from a reminder of these existing obligations under international law.

“his legal clarity on climate obligations is exactly what Vanuatu, alongside a global coalition of more than 85 nations is calling for, from the UN’s ICJ.

“The Court’s multilateral process will be inclusive, open to high and low emitting states, developed and developing nations. And the resulting advisory opinion from ICJ will make it crystal clear what climate acts or emissions by all states may hold legal consequences under international law. To strengthen Nationally Determined actions, we must strengthen our understanding of and reverence for the rule of International Law. This climate crisis is no exception.”

The President said Vanuatu’s proposal will inspire real action, and to save the intention of the Paris Agreement, and the effectiveness and integrity of the UN Convention on Climate Change

“Excellencies, as the World’s Leaders, we must not give up on this process, but we must change course, and we must use all tools to fix the broken and siloed economic, social and legal systems that have led us to this catastrophic place,” he said.

President Vurobaravu begun his address by expressing concern on the ongoing emissions increase, inadequate climate finance and the climate injustice suffered daily across the planet.

“How can we continue to express diplomatic niceties here, and yet invest in new carbon projects at home, resulting in communities uprooted from their ancestral lands by climate fueled disasters; men, women and children unable to meet their daily needs due to climate extreme and slow onset events. Fundamental human rights are being undermined, every minute of every day, by our continued collective addiction to fossil fuels,” he said.

“The current ambition in Nationally Determined Contributions is insufficient, leading us to even greater loss, damage and human suffering.

“Our systems are broken. This system is broken,” he said.