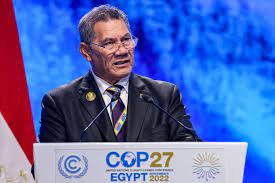 Tuvalu has become the first country to use United Nations climate talks to demand an international fossil fuel non-proliferation treaty, which would phase out the use of coal, oil and gas.

The small Pacific islands nation, which is acutely vulnerable to sea level rises caused by global heating, becomes the second country to call for an agreement to end the era of burning fossil fuels, which is the primary cause of the rapidly escalating climate crisis, fellow Pacific nation Vanuatu being the first.

Tuvalu made the call on Tuesday at the Cop27 climate talks in Egypt. Climate activists have welcomed the move but condemned large polluters, such as the US and China, for ensuring that fossil fuels have largely been shielded by previous iterations of the climate talks. Last year, at Cop26 in Scotland, countries vowed for the first time to “phase down” the use of coal, although the use of gas and oil was not mentioned.

Kausea Natano, the prime minister of Tuvalu, said that “the warming seas are starting to swallow our lands, inch by inch. But the world’s addiction to oil, gas and coal can’t sink our dreams under the waves.

“We, therefore, unite with a hundred Nobel peace prize laureates and thousands of scientists worldwide and urge world leaders to join the fossil fuel non-proliferation treaty to manage a just transition away from fossil fuels.”

“Countries like Tuvalu are the ones on the frontlines, they know they can’t just give in to the vested interests of the fossil fuel companies,” said Harjeet Singh, head of global political strategy at Climate Action Network International. “We know who the victims of the climate crisis are and we know who the perpetrators are but we don’t ever discuss fossil fuels, the elephant in the room.”

Singh said a fossil fuel treaty that would curb new exploitation of reserves and switch in a just way to renewables has so far been overlooked “by design” because of the reliance of several powerful countries on digging up and burning fossil fuels.

The Cop27 agenda includes discussion of future remedial payments made by wealthy countries to developing countries that are suffering the brunt of extreme weather in the form of floods, wildfires, droughts and other climate impacts. But the idea of explicitly agreeing to wind down fossil fuel use is not a priority for governments in Sharm el-Sheikh, despite the International Energy Agency warning that there can be no new coal, oil or gas infrastructure built if the world is to avoid disastrous global heating.

While no major emitter is backing the call for a new treaty, the concept has been backed by the Vatican, the World Health Organisation and a selection of city mayors, including Sadiq Khan, the mayor of London. Activists hope the support by Pacific nations will help create a similar sort of momentum to that which moved ideas such as keeping the global temperature rise to 1.5C above pre-industrial times from a fringe idea to a widely adopted goal.

Pacific looks to international court for help on climate