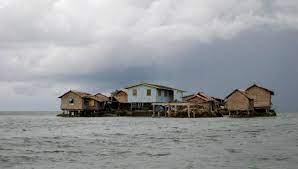 The Asian Development Bank (ADB) recommends raising to two metres, instead of the existing one metre, the imaginary waterline demarcation for projects in the Asia Pacific region to improve the resilience of structures against rising sea levels.

An ADB report presented during the bank’s annual board meeting (26-30 September) warns that sea levels in the Asia-Pacific could exceed two metres by 2100 due to the double whammy of sinking land mainly due groundwater withdrawal as well as the warming of the oceans as a result of climate change. The report draws on hydrographic records and geological evidence dating back several hundred years.

“Based on observed data collected since 2000, most islands in the Pacific Island region are subsiding. Therefore, the effect of sea-level rise will be magnified where the land is falling,” said the study.

Anthony Kiem, author of the study and professor of hydro-climatology at the University of Newcastle, Australia, says that sea-level rise in the Asia Pacific region is expected to worsen climate change impacts and presents a challenge to new and existing critical infrastructure.

While some paleoclimate records suggest that sea-level rise of five metres in a century has occurred before, the consensus view is that such extreme rise would happen over long periods (centuries to millennia) and is unlikely to occur before 2100, the study said.

According to the Sixth Assessment Report of the Intergovernmental Panel on Climate Change (AR6), the “projected global mean sea level rise of 1.7 to 6.8 metres by 2300 is possible”.

Given evidence about changes in sea levels projected by 2100 in Asia-Pacific, ADB has suggested that governments make suitable adjustments to the infrastructure that they plan to build.
“For short- to medium-term projects (i.e., with a design life of 20–30 years), a scenario of 0.5 metre by 2050; for long-term, a scenario of two metres by 2100; and for projects with an expected lifetime beyond 2100, scenarios of greater than two metres,” the study said.

“The Sixth Assessment Report of the Intergovernmental Panel on Climate Change and other work that have emerged since AR5 [the previous assessment] demonstrate that not only is sea level rise greater than one metre (relative to the 1995–2014 baseline) conceivable at some point in the 21st century but it is also plausible that sea level rise could exceed two metres by 2100,” the study said.